If you wish to discontinue receiving SFM articles, please drop me a line.

Sally and I lived in San Francisco for eight memorable years and we loved everything the city had to offer.  Most of all, we found a welcoming home away from home in the Aquatic Park Senior Center:

During the current Covid-19 pandemic, I have lots of time to surf the web as I shelter in place.  I found some interesting historical facts and photographs of Black Point Cove, currently known as Aquatic Park Cove.  The following are some developments that eventually resulted in San Francisco Maritime National Historical Park.

The population of San Francisco exploded after gold was discovered in California hills in 1848.  To sustain habitation in a peninsula covered with sand dunes, water from a few streams were channeled to the city.  One of the streams is Lobos Creek on the north shore that flowed from a spring-fed pond named Mountain Lake.  This pond is the only natural pond existing in the city today.

Sally and I visited Baker’s Beach a few times and watched ships go through the Golden Gate into San Francisco Bay.  We noticed a stream of water traversing the sandy beach and emptying into the ocean.  Now I know it is Lobos Creek, one of the critical sources of fresh water to the city in 1800s.  When this photo was taken during a dry summer season, water flow was slow.  The stream would have greater flow during the wet winter season. 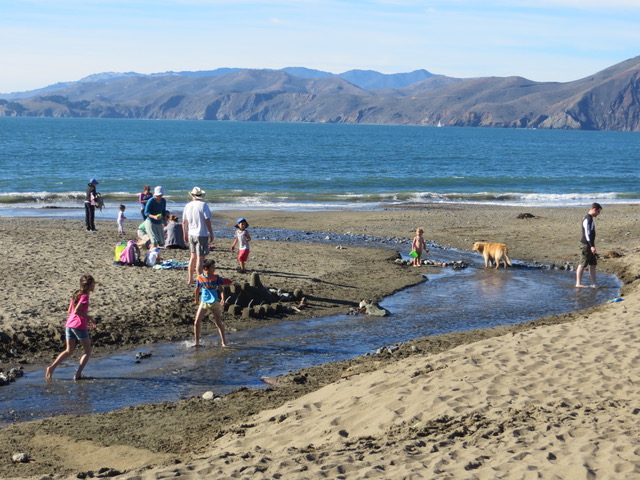 To bring water to the city, a 7-mile channel was built from Lobos Creek to Black Point Cove. 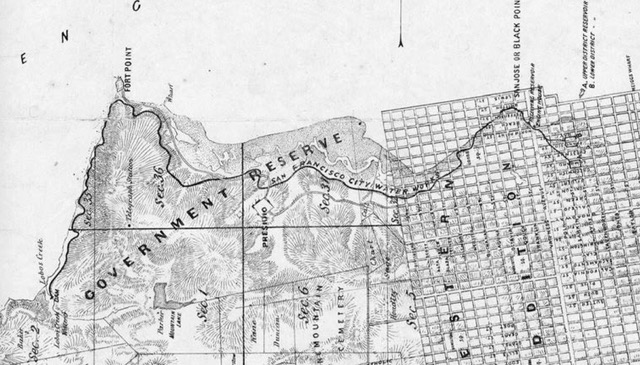 Parts of the terrain traversed were sand dunes, others were sea cliffs. 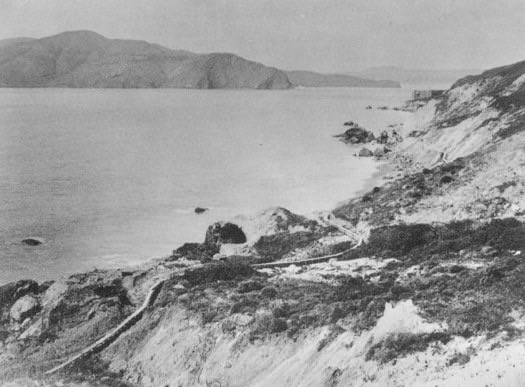 A watertight redwood flume was erected on sand dunes and cliff sides to carry water.  Some hikers found it a convenient foot path. 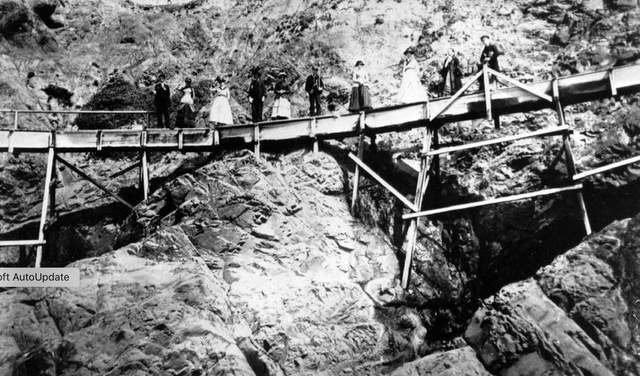 The flume wrapped around the Black Point outcropping. 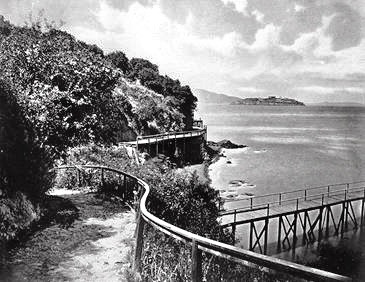 The water arrived Black Point Cove and accumulated by a pump house. 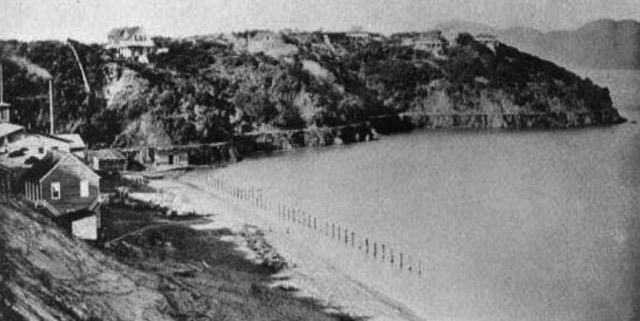 Water was pumped from sea level to the Francisco Reservoir 135 feet higher on Russian Hill.  From that elevation, water flowed to many parts of the city by gravity.

The Francisco Reservoir was in use until 1940s when it was replaced by the Lombard Reservoir, further up on Russian Hill. 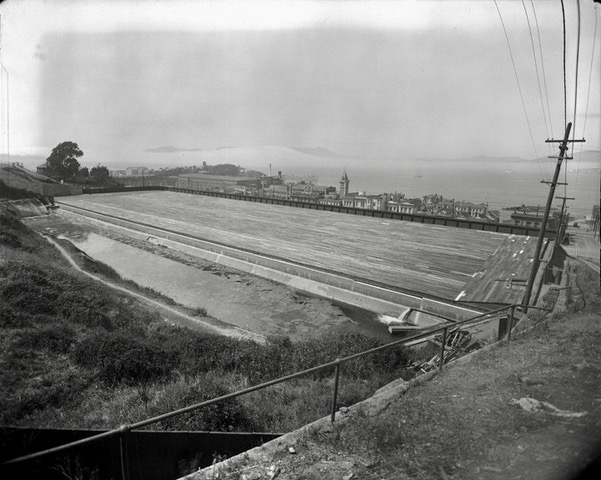 The Francisco Reservoir site has been vacant to this day.  Homeowners value their view of the bay and object to constructions that would obstruct that vista.  Many discussions were held in the last 80 years on its redevelopment with no decision. 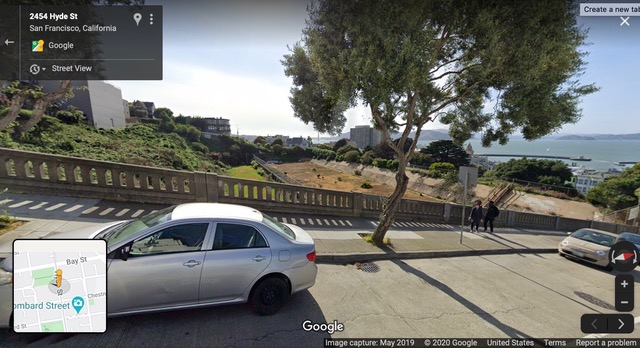 In 1859, Pioneer Woolen Mill was established to process wool and to manufacture woolen articles.  It was the first woolen factory in California.  Pioneer used large amount of fresh water from its artesian well but supplemented with water from Lobos Creek.

Pioneer hired 300 Chinese workers among its 800 workers.  It witnessed the traumatic racist discrimination and exclusion of Chinese immigrants in late 1800s. 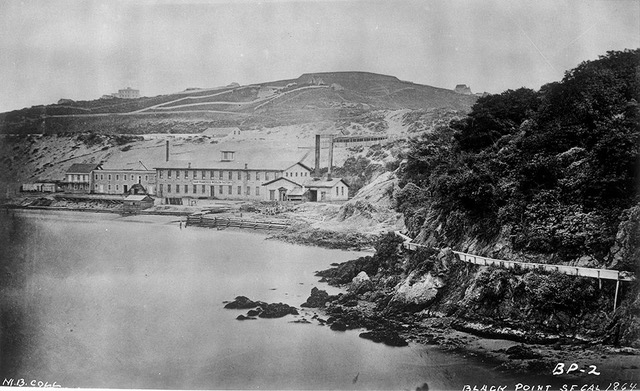 In 1895, Ghirardelli Chocolate Company bought the Pioneer Woolen Mill factory.  The skewed building in this complex, marked as Woolen Mill, was built in 1861 and is one of the oldest buildings in San Francisco.  From Aquatic Park Senior Center, we can see this building a stone’s throw away. 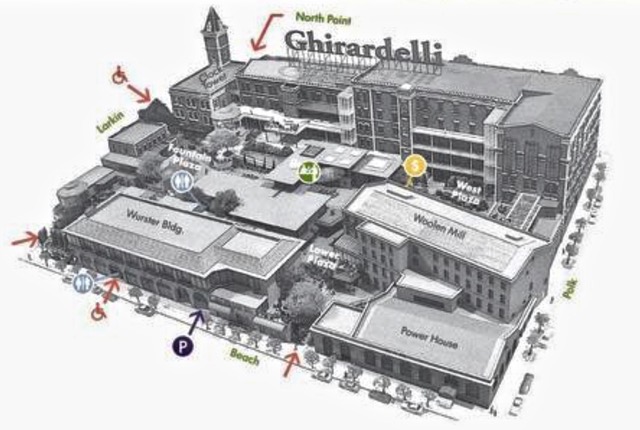 San Francisco was the key port on the US west coast.  To service the busy commerce, the State Belt Railroad was built in 1889 and ran along the waterfront by the piers. 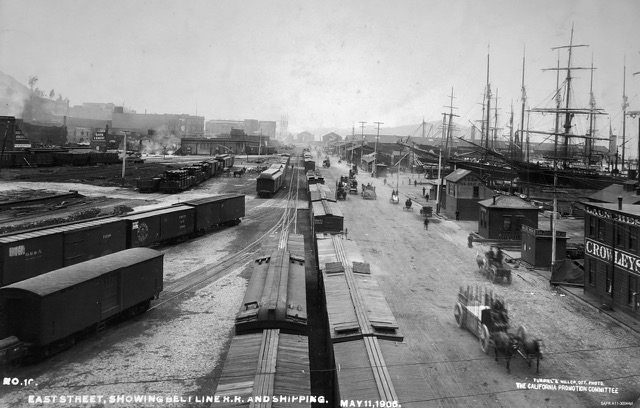 In 1912, Fort Mason became a military logistics center with three piers.  In addition, the Panama-Pacific International Exposition was to open in 1915 west of Fort Mason.  To connect these with the commercial San Francisco waterfront, the Belt Railroad was extended westward. But the Black Point Cove and the 100-feet high Black Point outcropping were obstructing the route.

In 1914, a trestle was built on Black Point Cove to carry the Belt Railroad. 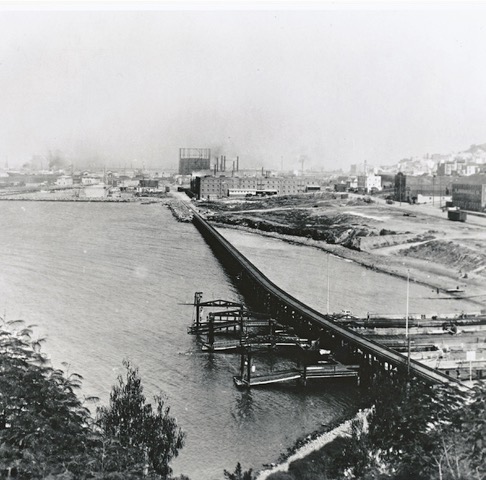 The Belt Railroad extension passed by the domed Palace of Fine Arts of the Exposition. 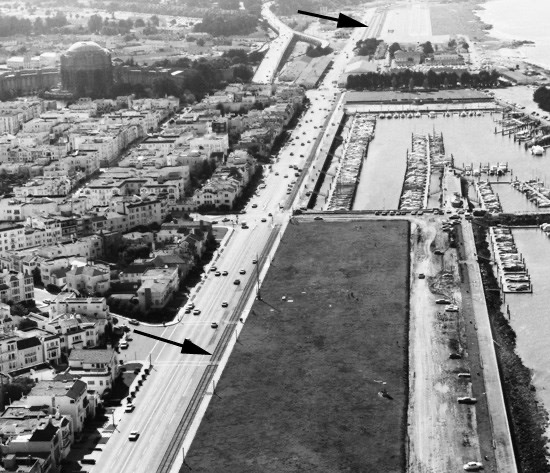 This is an aerial view in 1930s of Black Point Cove with the straight trestle. 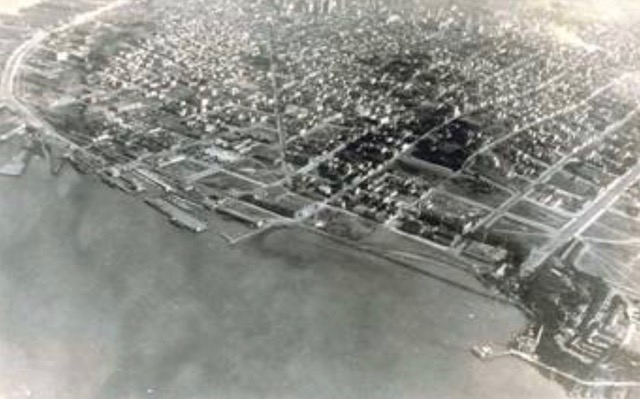 By 1950, this aerial photo shows the Aquatic Park Cove with almost all constructions completed. 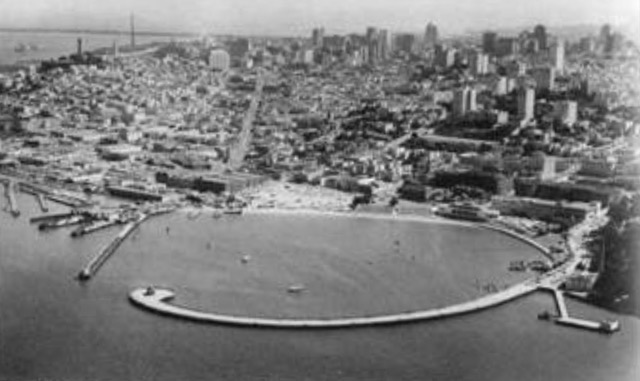 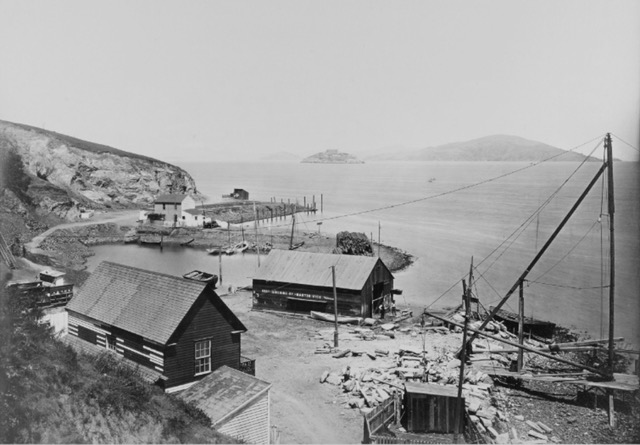 By 1910, the cove has become an industrial area with canning, confection and manufacturing industries. 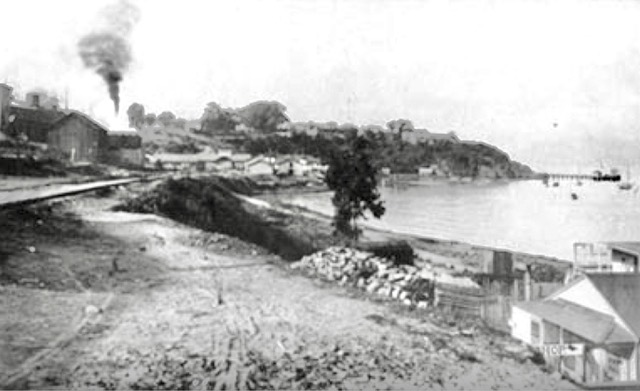 After San Francisco was hit by the 1906 earthquake, the city was destroyed by subsequent runaway fires due to insufficient fire-fighting water.  To protect itself from another big fire, the city built needed infrastructure.  Emergency pump station #2 was built in 1912 to supply sea water to fight fire in conjunction with fresh water stored in the 200 underground cisterns all over the city.  It sits by the sea with its substantial pump engine and tall chimney. 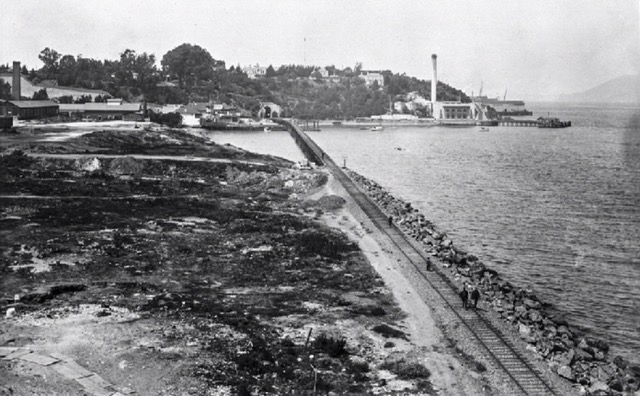 At the height of the Great Depression, Work Progress Administration (WPA) ordered the construction of Aquatic Park to provide work for large number of the unemployed.  Nearly 2,000 workers were employed at various times in its construction.

In 1932, the Municipal Pier was built to provide a breakwater to close off the cove and provide calm water for swimming and boating.  It became a favorite fishing pier. 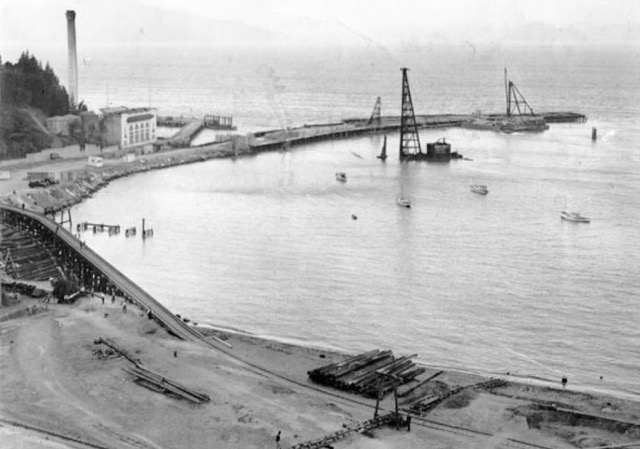 As the center piece of the Aquatic Park recreation area, the Bathhouse was designed in the Art Deco style of the 1930s.   It features the distinctive horizontal lines, classic rounded corners railing and windows of the style, resembling elements of a ship.  The building is decorated with beautiful murals and mosaics.

Our senior center is located in the lower level of this distinguished building.  It opened in 1947 and was the first non-profit senior center in the country.

In 1937, the Bathhouse was under construction.  The train track had been realigned to run in front of the Bathhouse instead of on the trestle. 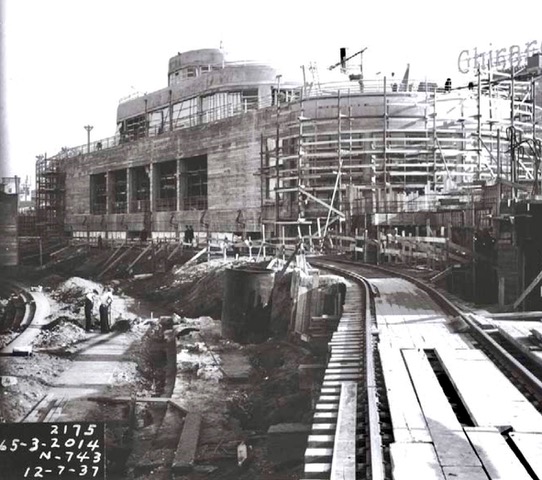 The track is not used by trains any more, and the tunnel has been closed.  The train track is still visible on the path by the Bathhouse.  Bicycles sometimes get their thin tires caught in the rail ruts and cause accidents.  It is just a matter of time before the tracks are removed. 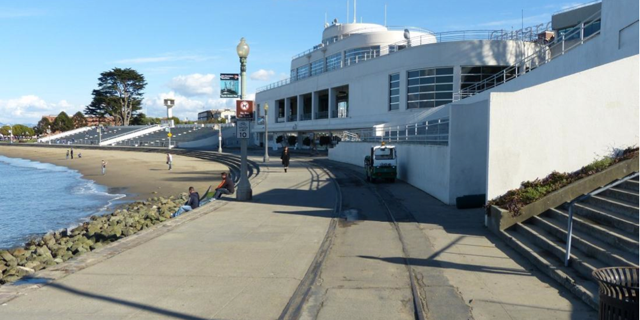 In 1988, Aquatic Park was designated San Francisco Maritime National Historical Park.  It is composed of the Muni Pier, sandy beach, Bathhouse repurposed as a museum and senior center, bleachers, swim clubs and a museum of historic ships.  This gem is providing relaxation and recreation to generations of San Franciscans.