Twenty years ago, I worked in Guangzhou (廣州) to start up the China operations of an American multinational corporation.  Sally and I lived in an apartment in White Swan Hotel (白天鵝酒店) for three years.  I worked very hard to build up the operation from scratch.

Our apartment high above the Pearl River (珠江) gave us a bird’s eye view of Guangzhou city.  From this perch, we saw smoggy sunsets, dark thunderstorms, dragon boat races, fireworks’ explosive shock waves, and busy traffic on the river.  Once, we witnessed a barge on fire as it was tied to other barges.  It was cast off from the other barges and the fire was put out after half an hour. 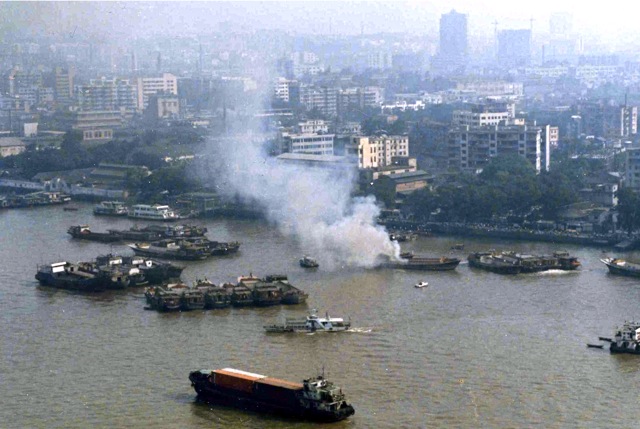 Guangzhou in those days did not have modern department stores, and there were few entertainment to our taste.  On weekends, we took walks in the old district (上下九路) of Guangzhou and explored the old stores that sold everyday utensils and groceries.  I particularly enjoyed touring the stalls in the alleys of the antiques market. 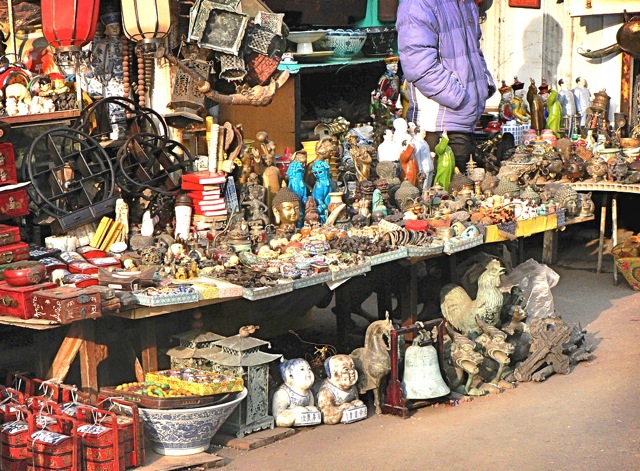 The dozens of “antique” stalls in the alleys sold similar items, 90% of which were reproductions “antiqued” to look old.  I learned by having bought fake items and developed methods to identify fakes.  A dozen of identical “antiques” is a sure sign of fakes.  But once in awhile, I found interesting antiques that sold for reasonable prices.

I was attracted to one item on these stalls.  They were dirty, odd shaped, frayed, and covered with glass beads.  I bought one for 50 yuan, or US$7, figuring I could afford to lose that amount if it turned out to be worthless.  After I washed off the thick layer of dirt with a brush and soap, I was surprised by the details, the workmanship, and the colorful beauty of the item.  While the fabric aged, the colorful glass beads became bright and shiny once they were washed.

The old fabric on its back was frayed from being worn constantly by its former owner.  Forgers cannot easily duplicate the appearance of naturally aged and frayed fabrics, particularly so for low priced items.  I was certain this was a genuine antique of about one hundred years. 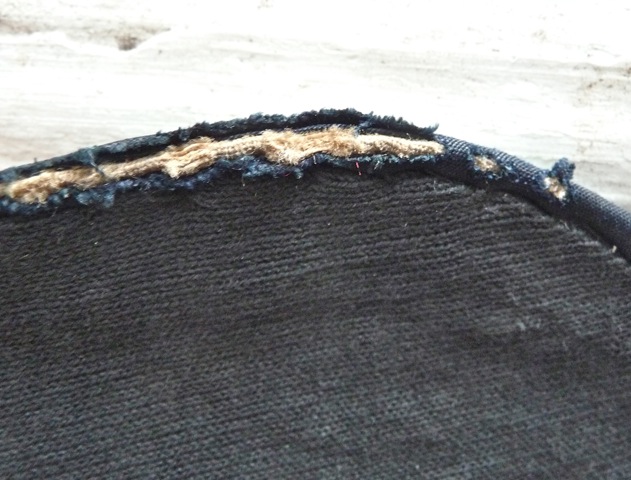 I found out this item is called eyebrow band (眉勒, me-le, pronounced mei-la) or grandma’s headband (亞婆頭帶) in Cantonese, and was worn by Chinese women all over China during the Ming and Qing dynasties (c. 1300 to early 1900s).  Me-le was worn to keep hair in place, provide warmth, and as a decorative element.  It was one clothing item that survived the forced abandonment of hanfu (漢服) worn by Chinese for thousands of years and the adaption of Manchu clothing (滿服) of the conquering Manchus.

Being satisfied with its authenticity, I bought over a dozen me-le during our stay in Guangzhou.  I did some research recently and found a Master’s degree thesis on this item:  http://www.docin.com/p-116181081.html 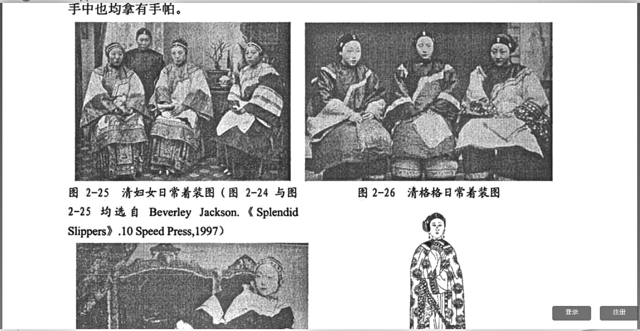 A me-le covers the forehead and temples of a wearer.  Chinese believed exposed temples would easily lead to headaches, especially in winter. 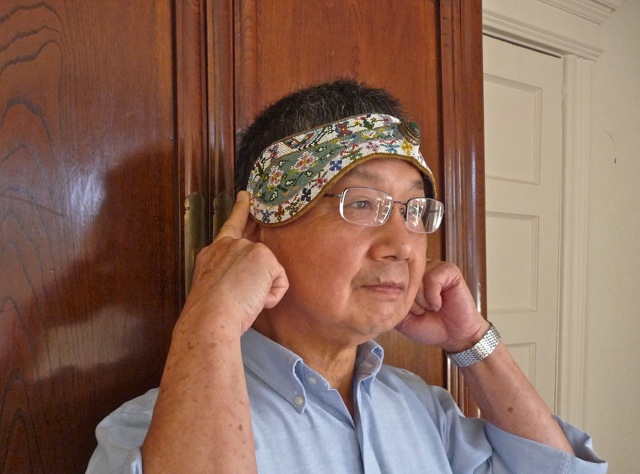 Me-le was an integral part of women’s clothing during Qing dynasty, overthrown in 1911. 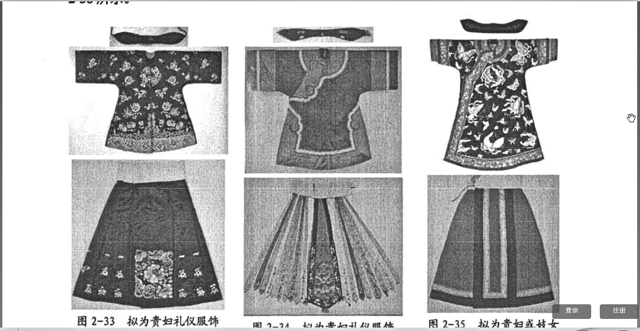 Different parts of China favored different shapes for their me-le.  The double crescent shape (#6 in the chart below) was favored by the people of Guangdong province (廣東) and is the predominant shape of my collection of me-le. 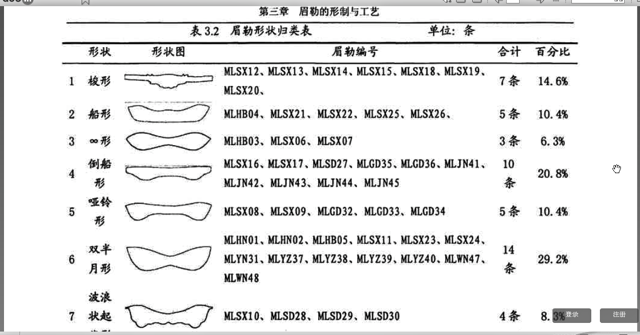 This me-le is covered with sewn-on glass beads that form patterns of flowers, birds, butterflies and other designs. 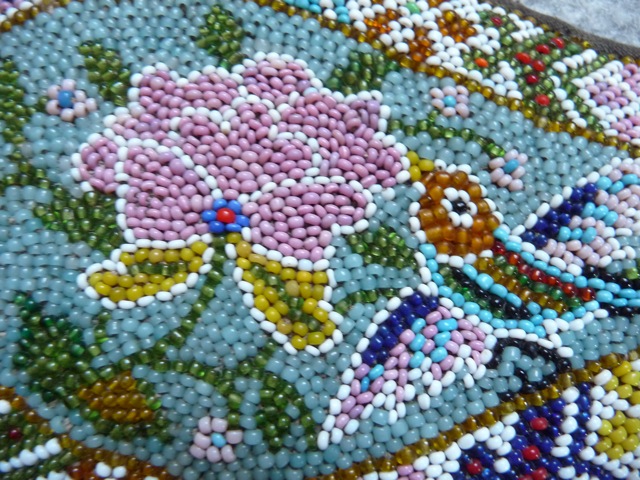 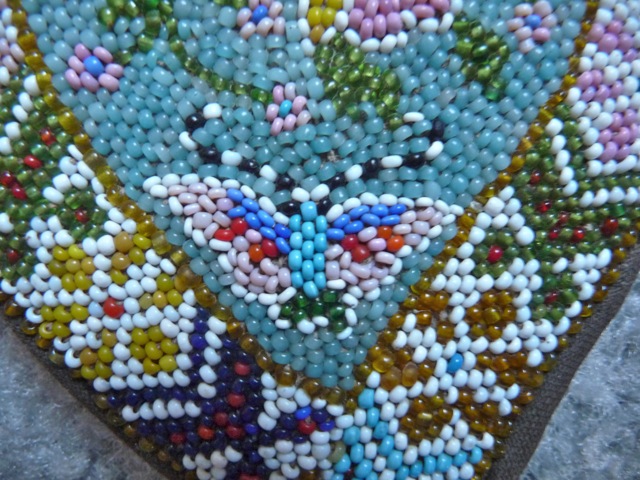 By counting the number of beading stitches in a small area and extrapolating to the entire surface, I estimate there are 10,000 beads on one me-le.  The maker of this one me-le must have spent weeks to painstakingly sew on these beads. 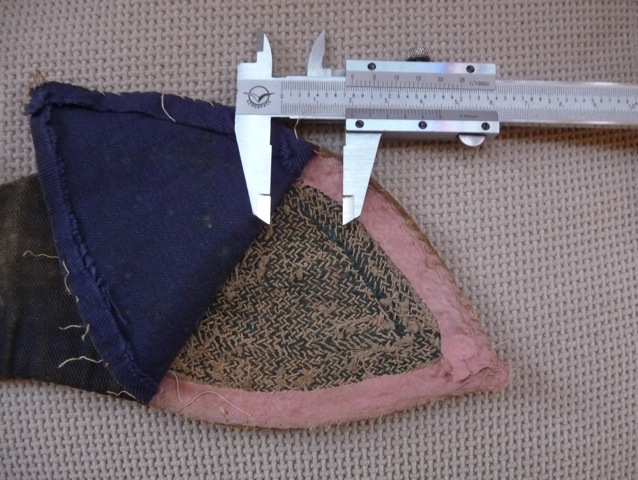 Some me-le have a raised center.  The Master’s thesis states that this is a form of phallic symbol and was considered auspicious. 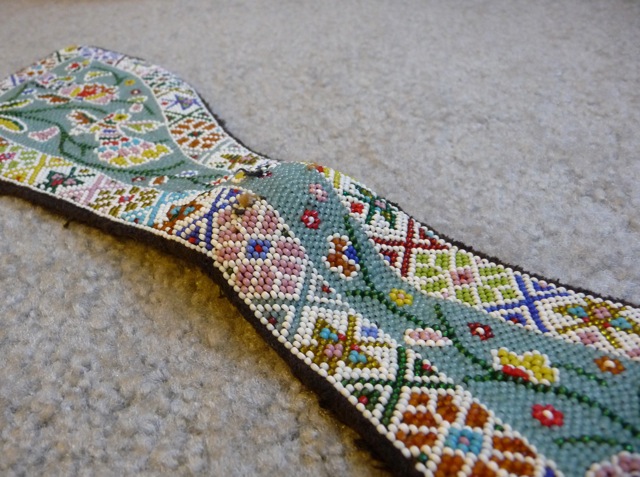 My entire collection of over a dozen me-le costed me about US$100.  I feel this is a good collection of finely-made antiques bought for a very low price.  Most of them are fully beaded and double crescent shaped. 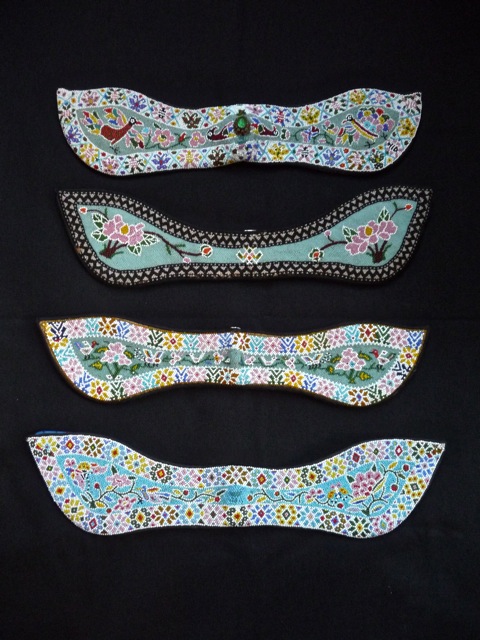 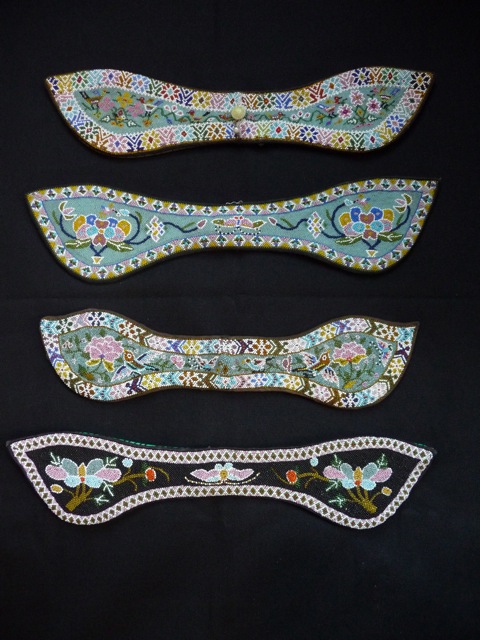 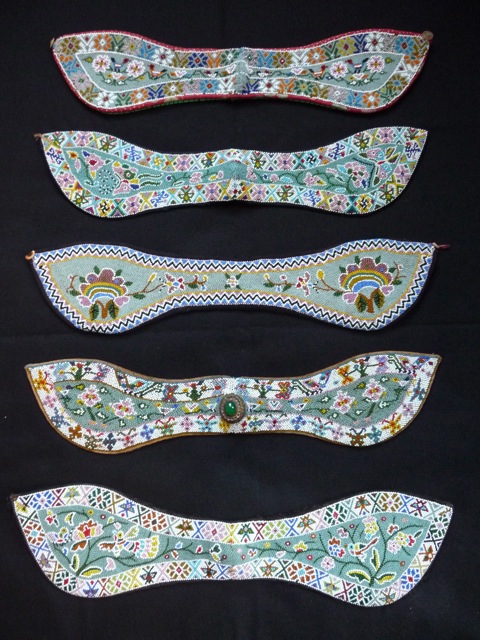 One is sparsely beaded, and its fabric is shiny silk. 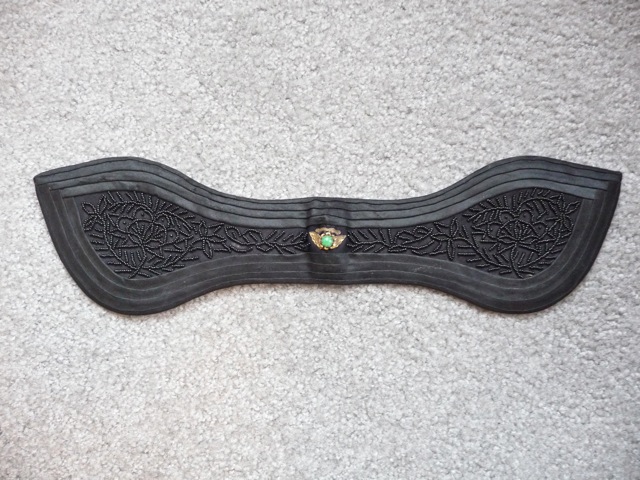 One unique rectangular shaped me-le is fully beaded and has symbols for longevity (壽) and Buddhism (swastika 卍, 萬字). 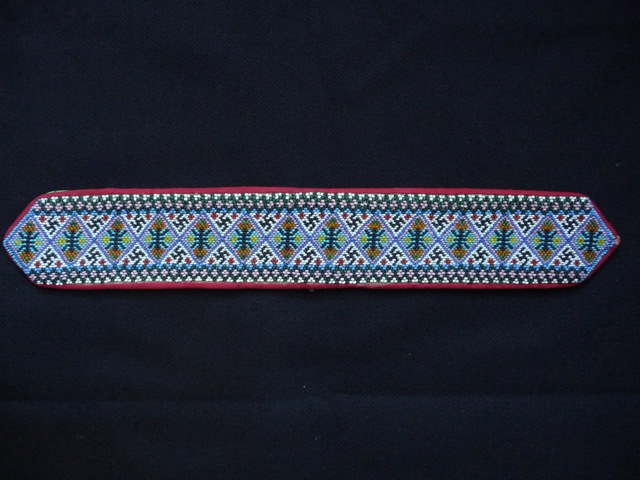 The swastika is generally identified with evil Nazism in the West.  But for thousands of years prior to that use, it has been used by Hindus to represent the popular elephant-headed deity, Ganesha, sometimes embellished with four dots.

The swastika is used in China, Korea and Japan to represent Buddhism.  This Kyoto map locates its many Buddhist temples with 卍. 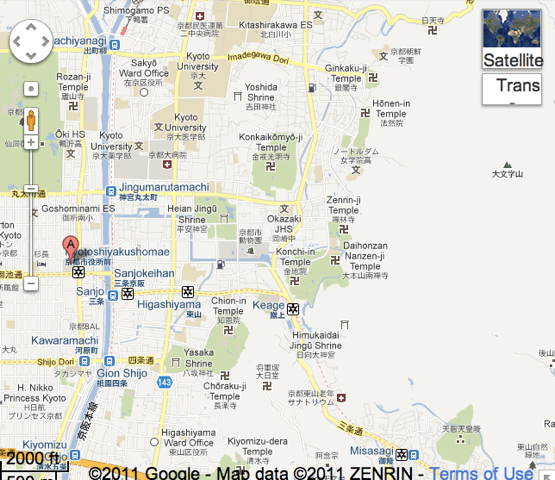