In the last few weeks, we see lots of pictures of demonstrations in Turkey.  Taksim Square in the center of Istanbul is obscured by a thick blanket of tear gas during a confrontation. 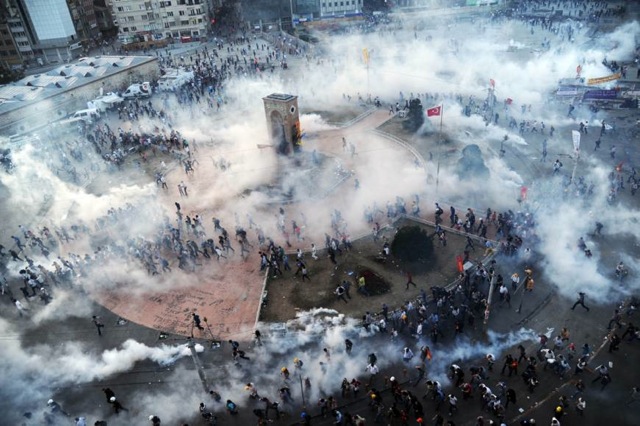 Police fire large amount of tear gas to disperse the demonstrators.  Some observers blame the police for being excessively violent.

Though many have been injured and a few have died, the tenacious demonstrators rally repeatedly to challenge the authorities.  This photo reminds me of our time on that street. 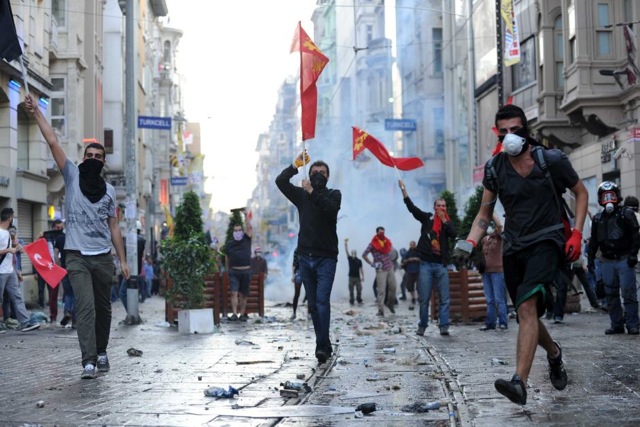 One year ago, we strolled this pedestrian street along with countless happy people.  Three boys hanged onto the street car and stole free rides. 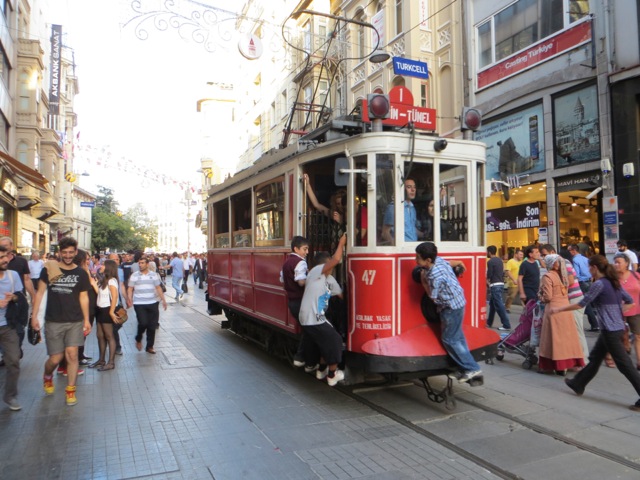 The street was packed with carefree people.  It was a serene sight. 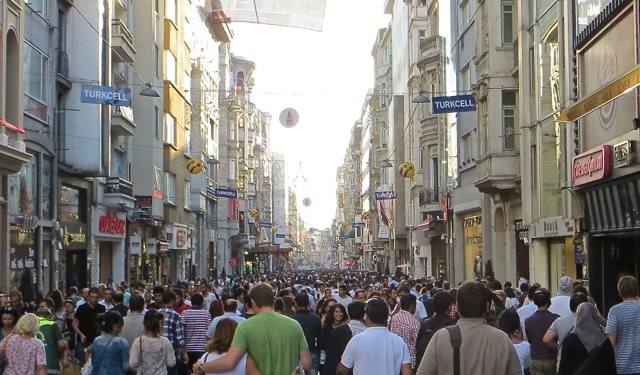 In our two-week tour of Turkey, we encountered the police only once when our tour bus stopped for a roadside check.  The bus driver took the CD from the bus’ monitor and handed it to the policeman to check his driving behavior. 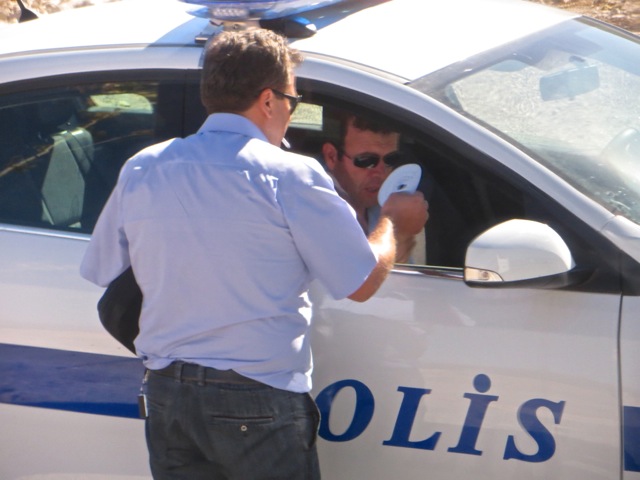 Then the bus driver took a breathalyzer test to show he had not drunk any alcohol.  This system gave me lots of confidence in Turkey’s protection of its visitors.

While most of Turkey’s citizens are Muslim, the country’s laws and culture are secular.  Religion does not dictate Turkey’s society, and its citizens take pride in its progressive secularity.

For hundreds of years, the Ottoman Empire ruled a large area of the Middle East.  After WWI, the Ottoman Empire was broken up for siding with the defeated nations, Germany and Austro-Hungarian Empire.  Even Turkey proper was divided into a colony of different nations.  Then Kemal Ataturk united Turkey, defeated the occupiers, and gave birth to the modern Turkish republic in 1923.  He took many actions to secularize the society, adopt Latin alphabets, educate the people, democratize the political system, and drag Turkey into the modern world.  He revived the Sick Man of the Middle East. 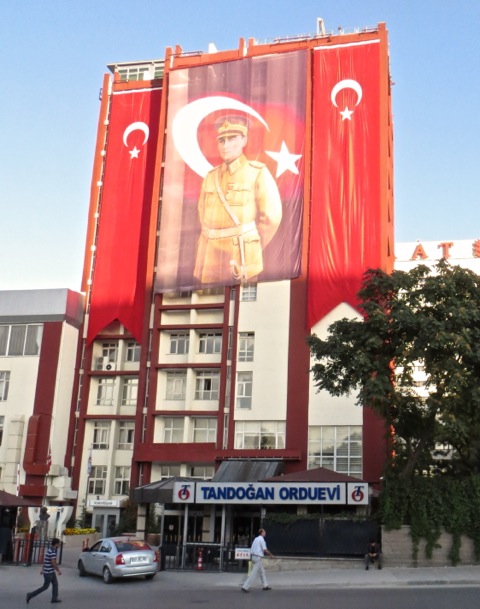 Ataturk is still idolized today as the father of modern Turkey.  He urged that Turks abandon their traditional Ottoman culture, dress and beards; and emulate European culture.  This tradition gives Turkish women much more freedom than their sisters in other Muslim countries, and they treasure this freedom. 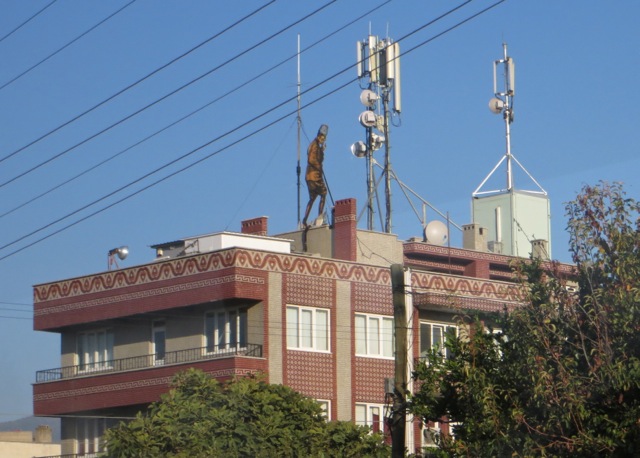 The Turkish army sees itself as the torch bearer of Ataturk’s teachings and has been a staunch supporter of a secular Turkey.  On Veteran’s Day, soldiers attend a ceremony at Ataturk’s tomb. 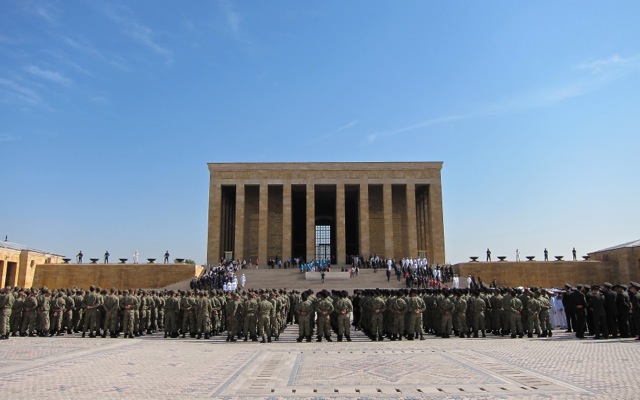 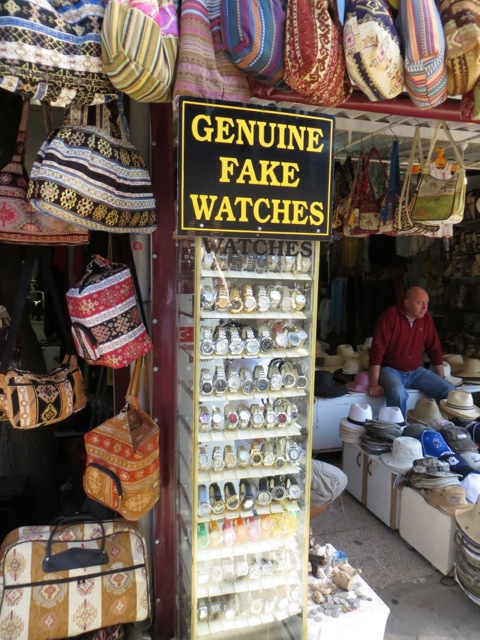 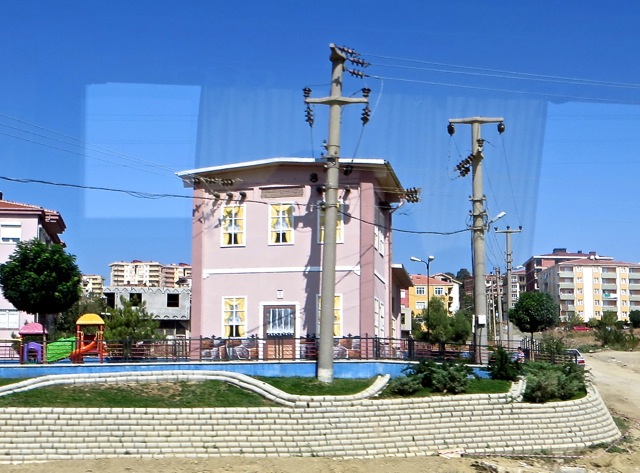 Even religion is viewed with a light heart.  This bus sports the words Allah Korusun, translated as “God Forbid”.  Its true meaning escapes me. 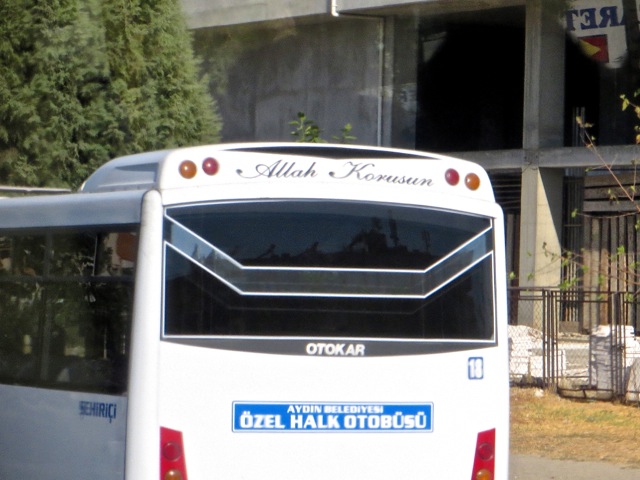 Outside a Whirling Dervish sacred site, a cafe offers free refreshment to visitors. 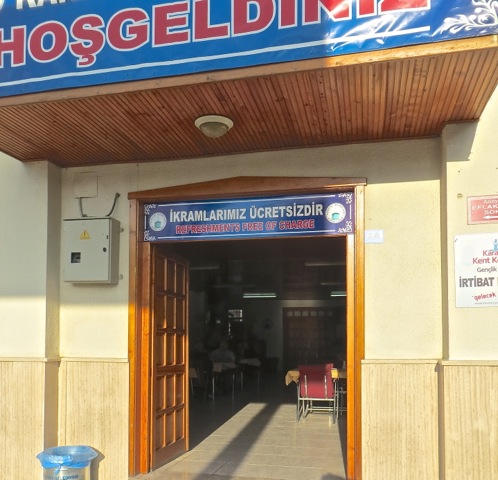 I appreciated a free cup of sweet Dervish tea. 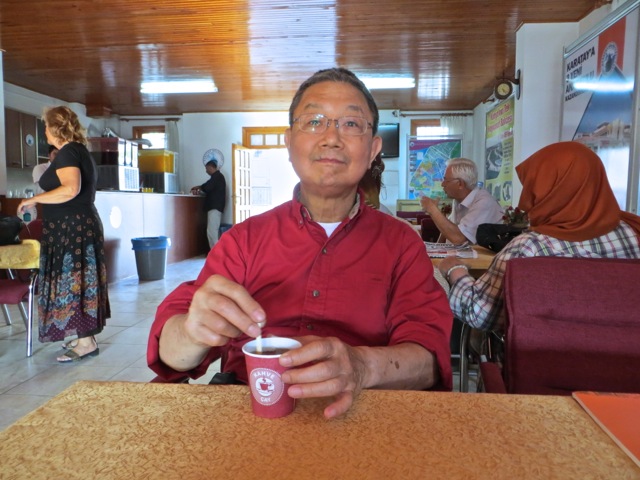 Even the stronghold of conservatism, Konya, looked relaxed.  But a groundswell of conservative Islamic leaning among the less-cosmopolitan Turkish people elected a conservative president, Erdogan, into power for the last dozen years.  Erdogan has pushed Turkey slowly into a more Islamic society claiming it is the will of the majority of the Turkish people. 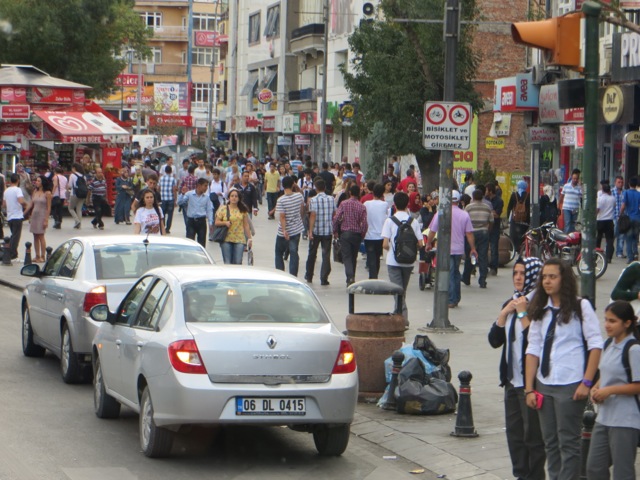 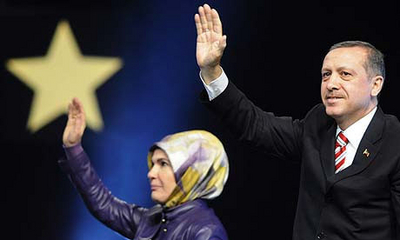 In major cities like Istanbul, some women are beginning to wear all-covering dresses and scarves.  For decades, Turkish laws and customs frown on non-Western dress, long beards and traditional Ottoman fez hats. 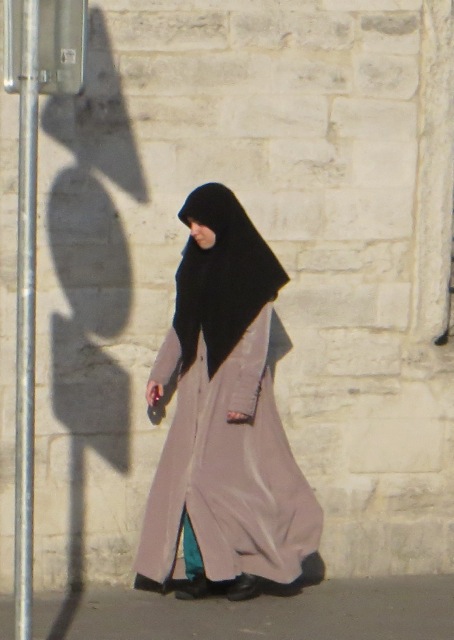 The volatility of this issue was brought home to us when our tour guide refused to accompany us into a mosque-turned-museum as it began to require all women to wear head coverings.  She felt she had to take a stand against this intrusion into her rights. 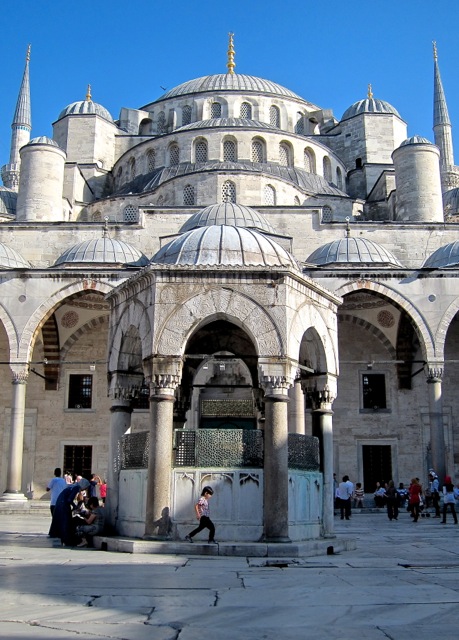 These women may be punished one day by Islamic conservatives for dressing modern and thinking free. 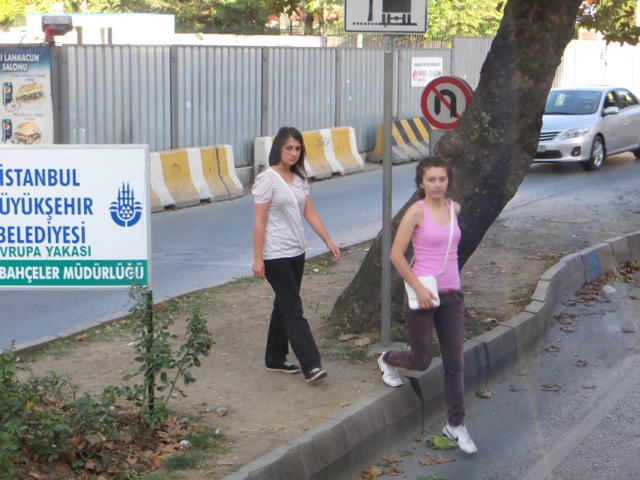 This is an iconic picture of a woman in a red dress being gassed by the police during a confrontation. 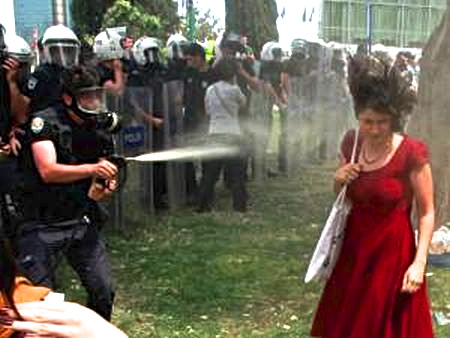 It is difficult to say how this Turkish culture war will develop.  On the one hand, Erdogan was elected by the majority of the people and he carries the democratic mandate.  His action to change Turkey into a more Islamic society can be justified as the will of the people.  On the other hand, I can empathize with the cosmopolitan Turkish people who don’t want to give up their freedoms and regress into the 19th century.

If the Turkish army gets involved with the current upheavals, it may very well side with the protesters against the democratically elected president.  I hope the descendants of this partisan fighter will not allow Turkey to fall into a civil war. 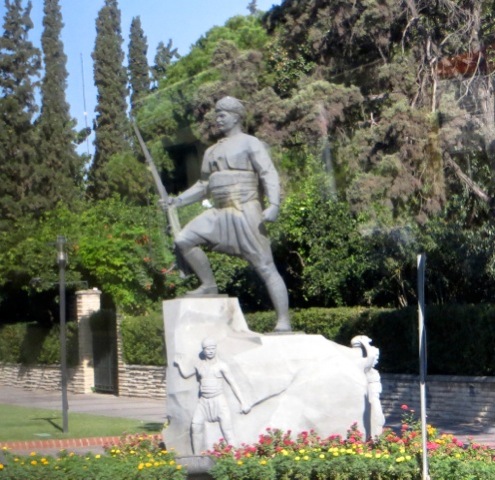