In the 1990s, the world was anguished by the brutal war in the former Yugoslavia and by the suffering of its people.  Month after month, we read about the chaotic fighting among the Serbs, the Muslims and the Croats.  Neighbors invaded each other, people were evicted from their homes, concentration camps were established, women were systematically raped, atrocities were committed, and thousands of people were massacred.

I was confused by the events and the cast of characters.  The fighters included the Yugoslav army, the Serbian army, the Croatian forces, the Bosniaks, and the various other armies and militias.  The locations were all mixed up with no definitive fronts, and villagers were fighting neighboring villagers.

Recently, Sally and I took a trip to the former Yugoslavia.  Through research and viewing some of the areas, I gained some understanding of that confusing affair.

The former Yugoslavia lied in the Balkan Peninsula, separated from Italy by the Adriatic Sea.  The people are ethnic Slavs who settled in this area in the 8th century.  The major ethnic groups are the Orthodox Christian Serbs, the Roman Catholic Croats and the converted Muslim Bosniaks.  They speak a mutually intelligible Slavic language.

The roots of the “last war”, as the local people call it, lies in the Ottoman Empire’s expansion into Europe.  Beginning in 1200s, the Turkic tribe expanded and built a great empire that covered the Middle East, North Africa, and southeast Europe and lasted 700 years.  As it pushed through the Balkan Peninsula. it conquered Bosnia and clashed with the Austrian Empire at Croatia.  The Ottoman Empire’s expansion was halted on the border of Croatia in late 1500s, and the limit of its empire forms the bulge of Bosnia that pushes Croatia into a crescent shape. 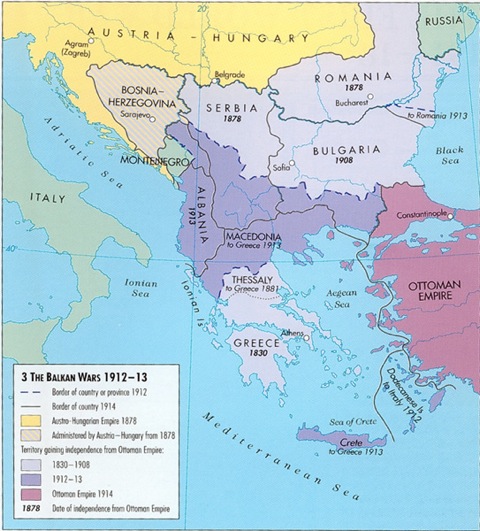 Bosnia was ruled by Ottoman Empire for 400 years.  Many Bosnians converted to Muslim to gain social, economic and political power under the Muslim Ottoman rule.  As the map below shows, Bosnia is a country of Muslim Bosniaks (45%), Orthodox Serbs (30%), and Catholic Croats (17%); and they live close to one another in neighboring villages.  While the other republics have more homogeneous ethnic composition, they also have areas of mixed ethnicities.  This intimate intermingling of heterogeneous ethnicities gave rise to the word “balkanization”. 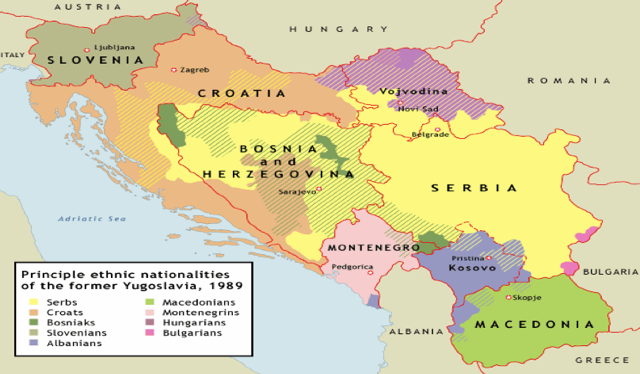 In the 1940s, Croatia became a puppet state of Nazi Germany, and the Croatian fascist Ustashi advocated a greater Croatia composed of Croatia and Bosnia.  The Ustashi tried to get rid of the Serbs by killing 1/3, expelling 1/3, and converting 1/3 to Catholicism.  It established concentration camps in 1940s and killed an estimated 500,000 Serbs.  This planted a deep wound in the Serbian heart.

After WWII, strongman Tito bound Yugoslavia into one Communist federation of constituent socialist republics.  After Tito died in 1980, the republics started to vie for greater independence.  It is noteworthy that the Serbs controlled the Yugoslav army and its weapons.

After the collapse of Soviet Union in 1990, these republics vied for independence.  Slovenia declared independence first and gained it after being attacked by the Yugoslav army for 10 days. 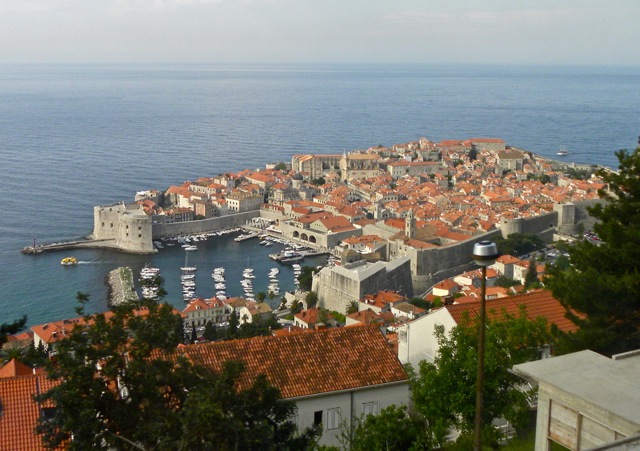 Yugoslav army gave weapons to ethnic Serbs living in Croatia to attack their Croatian neighbors.  As we drove through those areas in Croatia, we saw some destroyed Croatian buildings stood unrestored. 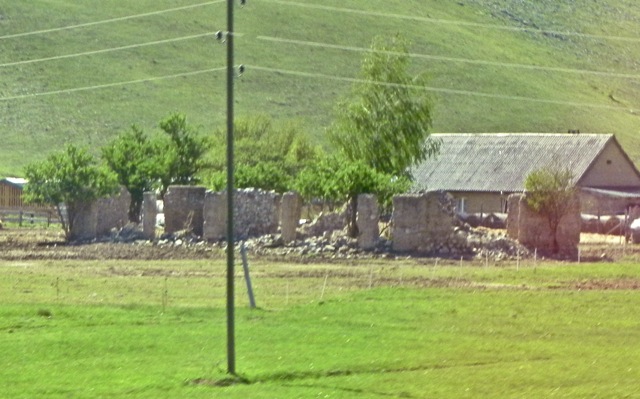 An Orthodox church was destroyed by Croats avenging the Serbs. 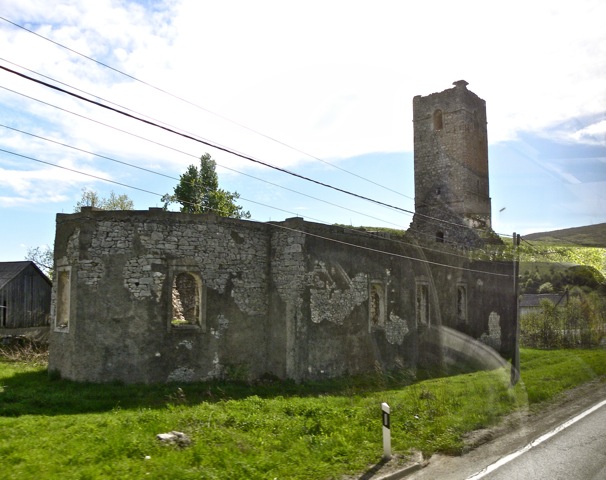 Croatia gained independence in 1995 after US intervened.  A tank used by ethnic Serbs against ethnic Croats is displayed in Croatia as a reminder. 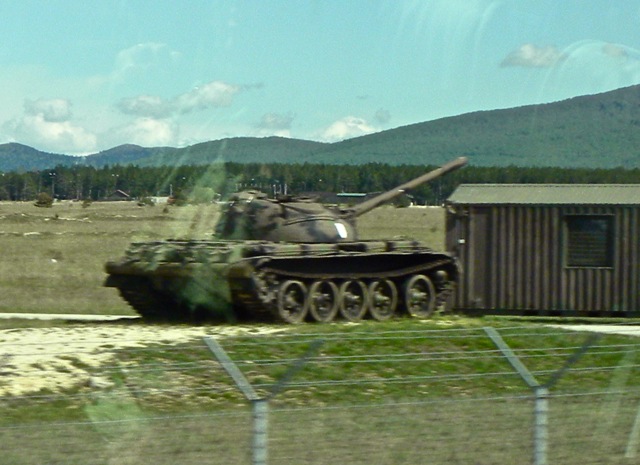 The Serbs controlled the army and many government positions.  They were loath to see the republics become independence and reduce the power of Yugoslavia they controlled.  In addition, some Serbian nationalists advocated a Greater Serbia which would link up all the areas inhabited by ethnic Serbs.  As the map below shows, that would involve taking land from Bosnia and Croatia.  They proceeded to execute the plan. 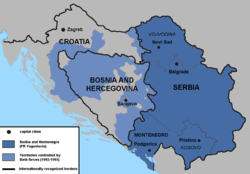 We saw mostly new houses as we drove through these areas, but we could still see many destroyed houses.  The owners of these vacant properties can reclaim them by producing documentations.  Left unclaimed, the property would revert to the state after 25 years.  As many of these houses remain unoccupied after some 20 years, their owners likely were killed or lost the documentation when their houses were burned. 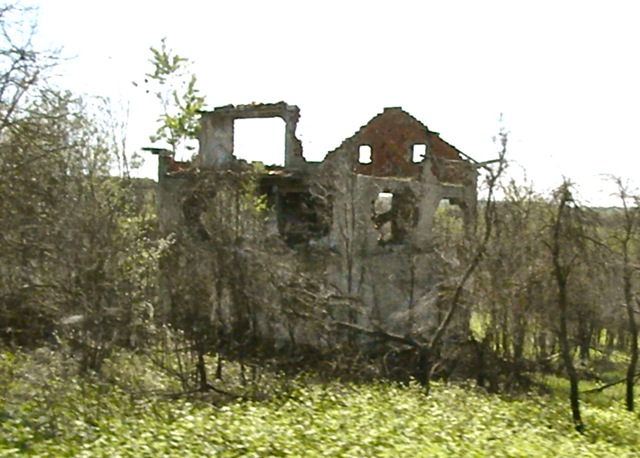 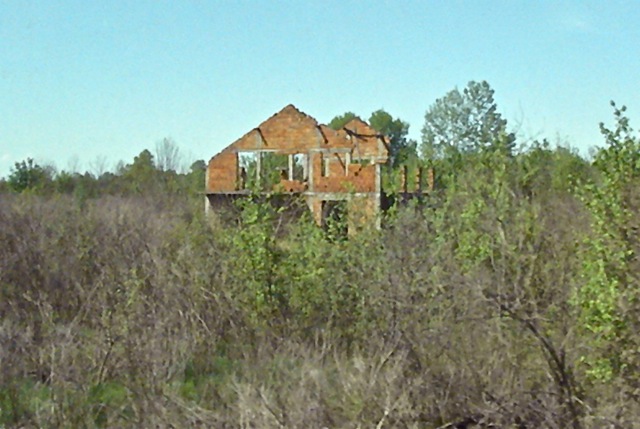 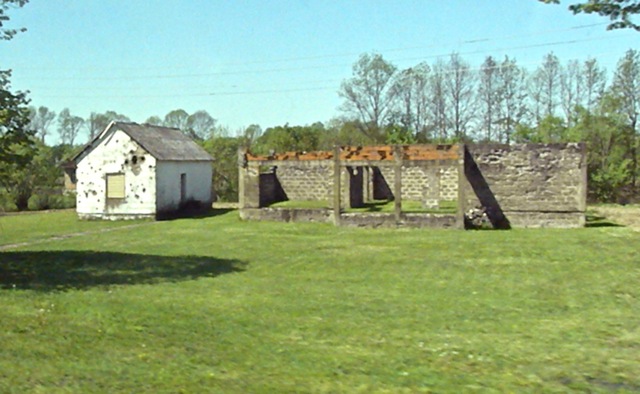 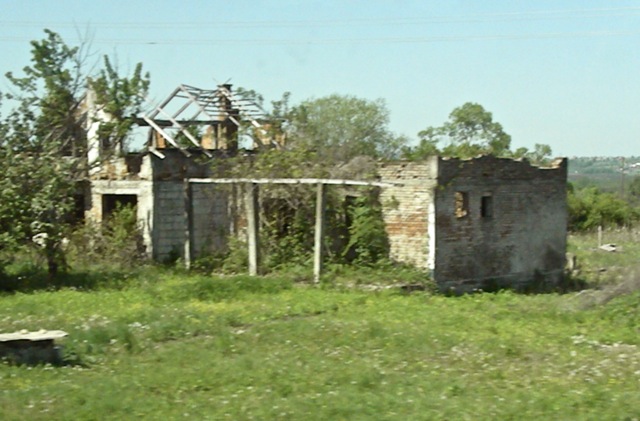 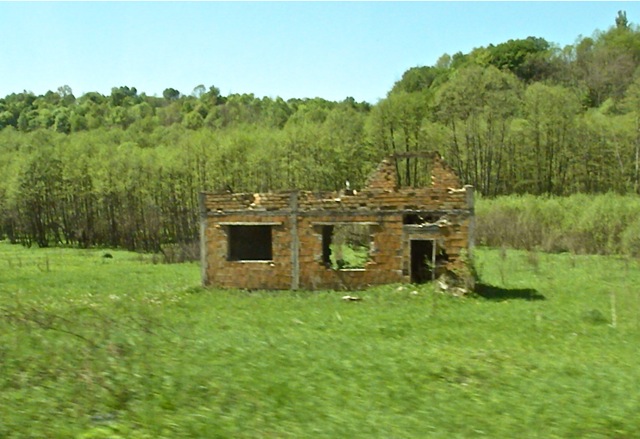 We see signs of revitalization.  This man was farming near a destroyed house. 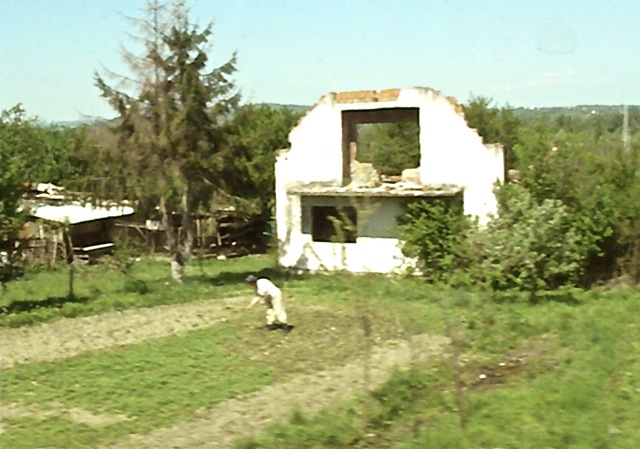 A new highway is being built next to burnt out houses. 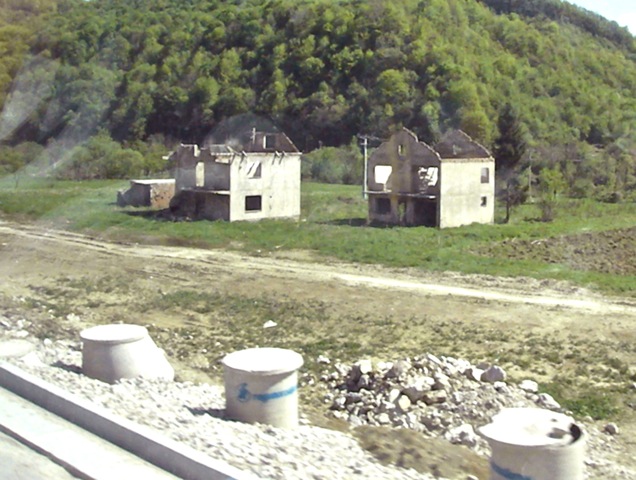 A new house was built and occupied next to a destroyed house. 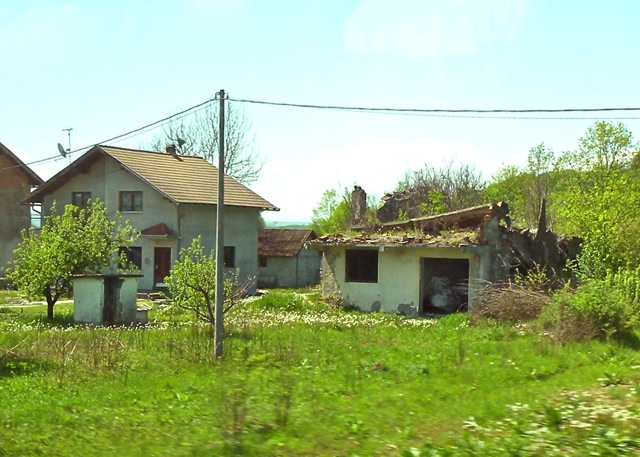 The capital of Bosnia is the beautiful city of Sarajevo which held the 1984 winter Olympics.  This city occupies a 2-mile wide valley, surrounded by high hills that are dotted with houses.  The Bosnian Serb army and the Serb-dominated Yugoslav army surrounded the city and shelled it from the hills.  The siege lasted four years with 10,000 city residents killed.  While most cemeteries in Bosnia are segregated by religion, those killed in the siege were buried in common cemeteries. 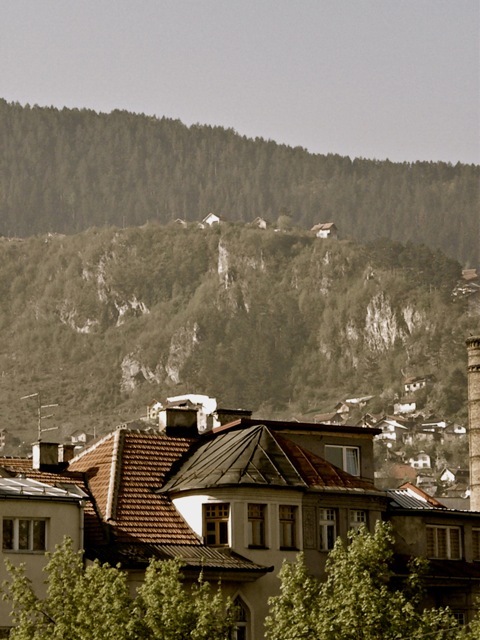 Most shelled houses in Sarajevo have been repaired, but some damaged buildings remain unrestored.  This building shows shrapnel damage. 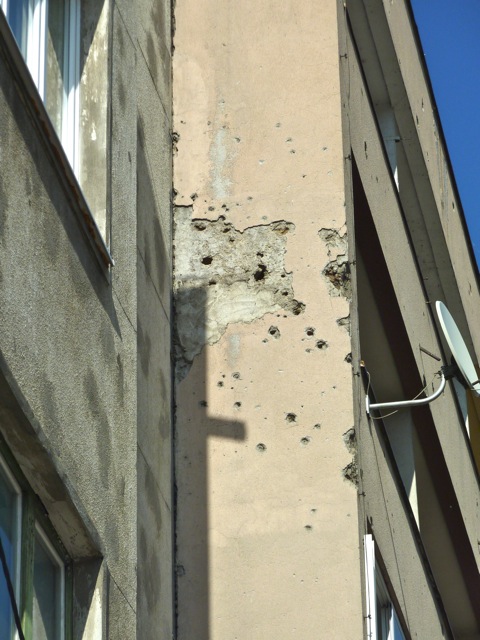 These heavily damaged building are left untouched as a memorial. 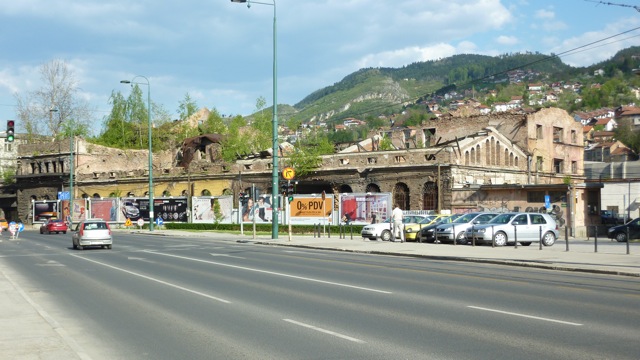 Bosnian Croats also wanted to establish an Croatian area within Bosnia with the ultimate goal of uniting with Croatia.  While Bosnian Croats allied with Bosniaks in fighting Serbs, they often attacked each other.   In effect, the Serbs and Croats living in Bosnia wanted independence from Bosnia even as Bosnia declared independence from the former Yugoslavia.  This was the most confusing part.

One place we visited is the city of Mostar which was attacked by Bosnian Croat to cleans it of Bosniaks.  The number of shrapnel holes on this building shows the intensity of the shelling Mostar suffered. 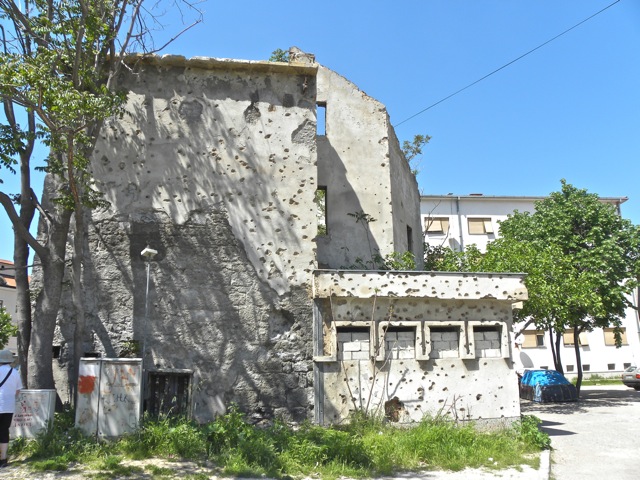 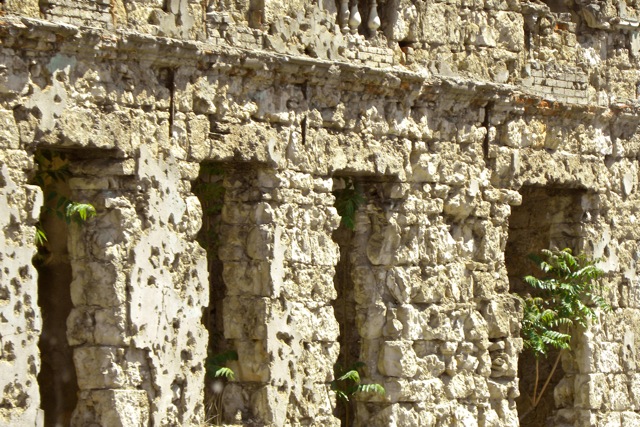 A brand new house was built next to the shell of a destroyed house, showing great contrast. 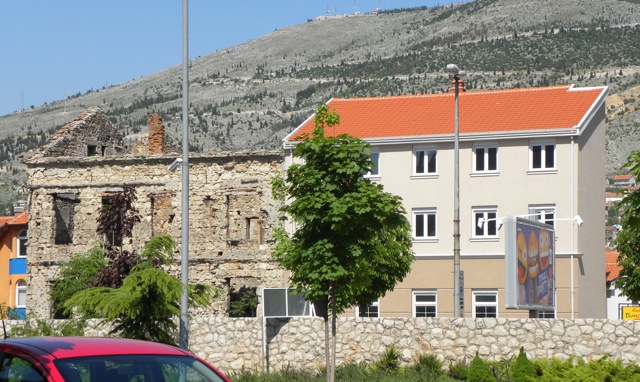 Tourism is the biggest industry in Bosnia.  Stores in new houses face destroyed houses and briskly sell to throngs of tourists.. 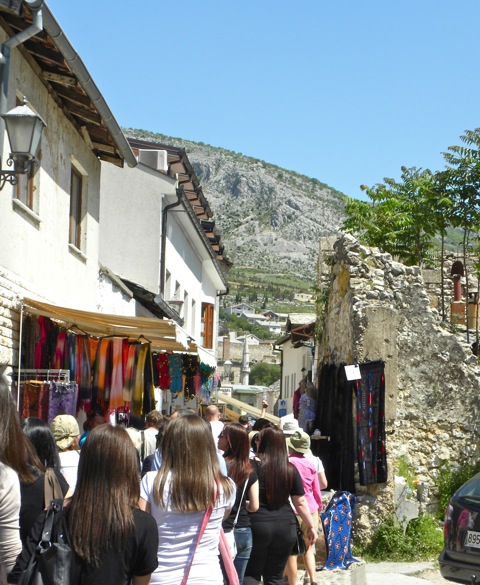 The iconic Old Bridge of Mostar (built 1566) was bombed and destroyed during the siege.  After the war, pieces of the destroyed bridge were retrieved and used to rebuild the Old Bridge. 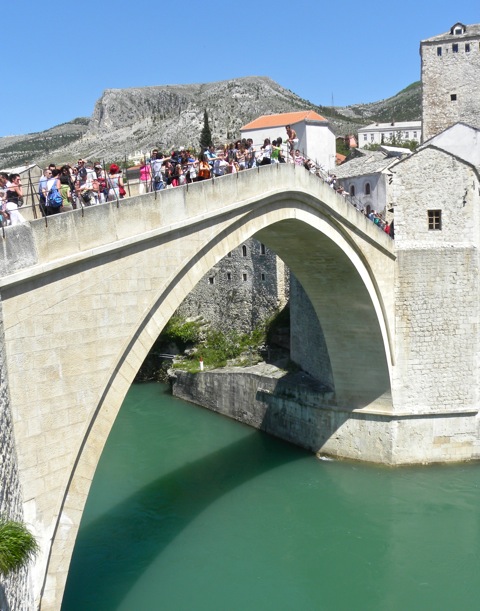 The Bosnian War lasted ended in 1996 after NATO air force attacked the Serbian army.  The ethnic Serbs succeeded in linking the Serb-occupied areas into a crescent-shaped Republika Srpska.  The rest of Bosnia belongs to the Federation of Bosnia and Herzegovina, dominated by Muslim Bosniaks and Croats.  These two governments form the independent Republic of Bosnia and Herzegovina 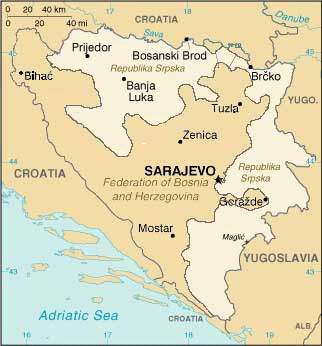 Subsequently, Kosovo declared independence from Serbia and was attacked by Serbian army.  There were lots of atrocities that prompted NATO to conduct air attacks on the Serbian army.  The war lasted from 1996 to 1999.  As we did not go to Kosovo, I have no photos of Kosovo to show.

Within ten years, the former Communist Yugoslavia broke up into seven independent nations:  Slovenia, Macedonia, Croatia, Bosnia and Herzegovina, Serbia, Montenegro, and Kosovo.  With balkanization a fact of life there, the seeds of conflict remains and can blow up again sometime in the future.