I spent a few days in Mexico City primarily to visit its archeological sights.  While there, I caught a few glimpses of everyday life in this mega city of 22 million inhabitants.

An angel appeared in a park. 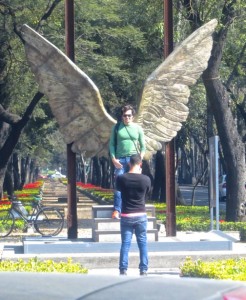 When the mortal man stepped down, the eternal wings stayed anchored to their perches. 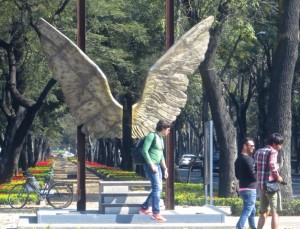 A young woman rested on a park bench, oblivious to the demon residing in the tree next to her. 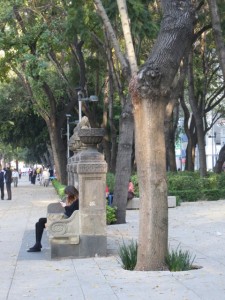 The tree had a grotesque face with a bleeding right eye. 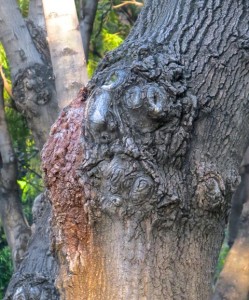 This woman could put her pet dog in her special back pack, but chose to carry it in her arm. 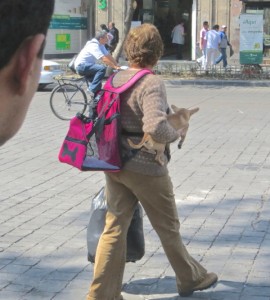 The efficient but crowded subway (metro) system reserved the first few cars for women and children. 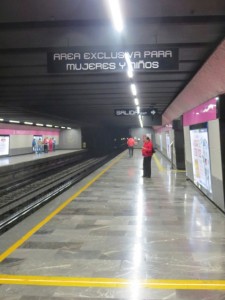 But some men (including me) ignored the rule and rode the reserved cars.  I thought erroneously the reservation applied to senior citizens also. 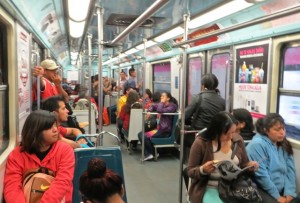 This Snob Bistro could have been named by mistake, or maybe it really wanted to attract snobbish well-to-do customers. 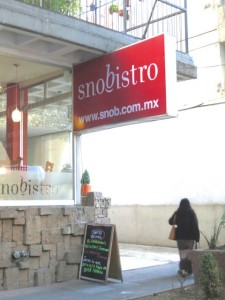 Simple eateries like this stall lined many sidewalks and catered to the common folks. 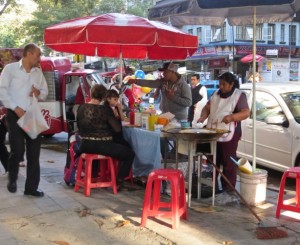 Heeding the warning not to drink tap water in Mexico, I bought a jug of water for every use.  I escaped Montezuma’s revenge. 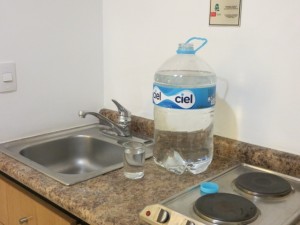 For $25 a year, Mexicans can use these bicycles any time. 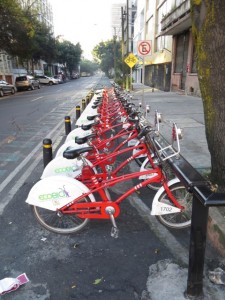 Bicycles were hitched to trailers and worked as cheaper taxis. 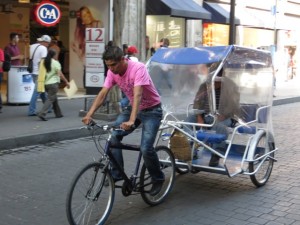 A carpenter wore his tool pouch with style. 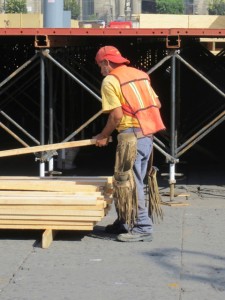 This woman peddled water to cars and kept her child in an aerial nursery. 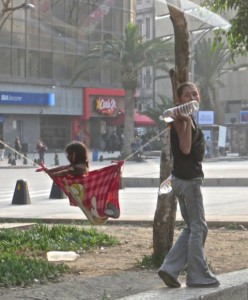 An ambulance with wailing siren drove between lanes.  Law abiding car drivers did not trail it to beat the bumper-to-bumper traffic. 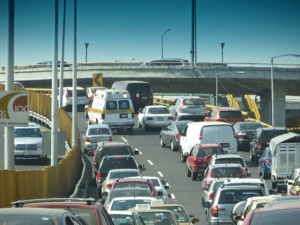 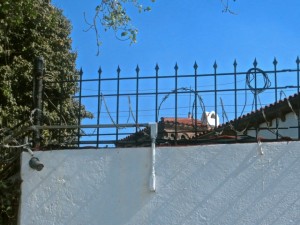 This written sign looked like a protest.  My limited Spanish tells me it was a proclamation involving Cortez who killed emperor Moctezuma and conquered the Aztec Empire in 1521. 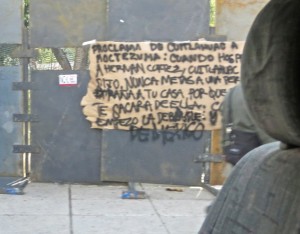 The police in Mexico City seemed tense.  Almost every police car had its flashing lights on all the time, whether it was stuck in traffic or parked by the curb. 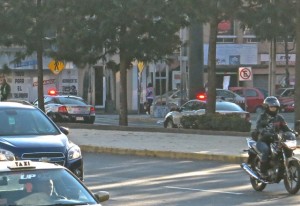 There were many policemen in the Historical District.  They carried riot helmets and wore protective body armors. 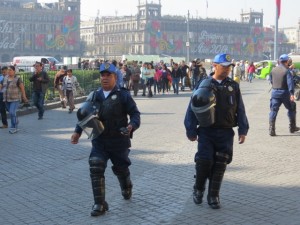 Riot policemen waited on a side street with their riot control gears. 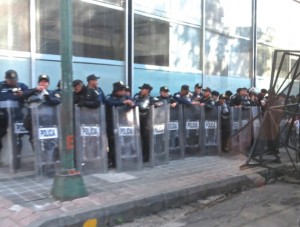 When I was there, the Zocalo Square was peaceful.  Mexico City sits on a dried lake bed and is sinking one inch every year.  Uneven settling causes parts of the Metropolitan Cathedral to tilt. 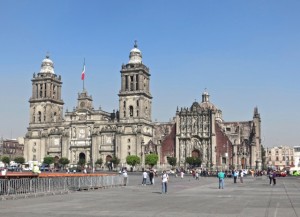 The day before I arrived, this Zocalo Square was the scene of a massive protest of 10,000 people. 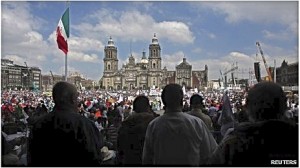 One of the ongoing protests is by teachers who object strongly to the new national law that mandates all teachers be evaluated for hiring and promotion.  This law is meant to stop the powerful teachers’ union from deciding on teacher hiring which resulted in unqualified persons inheriting or buying teaching positions.  The teachers’ protest has lasted for months and tied up traffic in main arteries.  Here, they gathered in front of a barricade that separated them from the police. 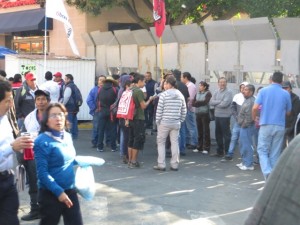 In another part of the city, I passed by a park with many tents.  A portable toilet provided sanitation service. 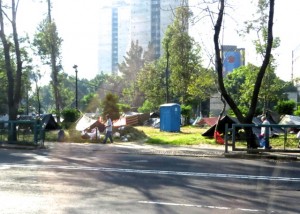 A few months each year for the last 20 years, hundreds of farmers camped out in the capital to protest a land dispute.  To attract attention when they felt ignored, the men and some women stripped off their clothing a few years ago.  To add insult, the men hanged pictures of the offending official in front of their crotches. 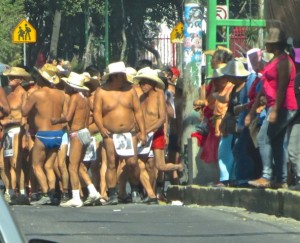 Sometimes the farmers would strip and march completely naked.  But when I was in Mexico City, they wore shorts to protect my innocent eyes. 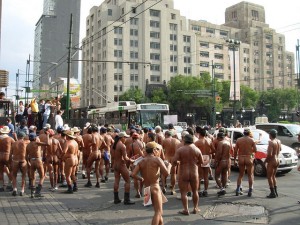