Chinese contact with Central Asia began during the Han 漢 Dynasty in 200 BC.  After defeating the preeminent  power the Huns (XiongNu), Han dominated Central Asia and made its numerous kingdoms into Chinese protectorates.  The Han Great Wall was extended to the edge of present day XinJiang 新彊, and Chinese troops were stationed deep into Central Asia,

Tang 唐 dynasty (618 – 907 CE) was another one of the greatest dynasties in China.  It was an open society that accepted foreign influences and its capital city ChangAn 長安 was the most cosmopolitan city in the world.  Being militarily strong, Tang power extended into Central Asia and made city states in current day XinJiang 新彊 and Central Asia, including current day Afghanistan, into Tang protectorates.   Note the Turkic Uighurs lived in present day Mongolia and did not migrate to XinJiang until hundreds of years later.

Tang’s westward expansion met an eastward-expanding Arab army at the Battle of Talas 怛羅斯戰役 in 751 CE in present day Kyrgyzstan 吉爾吉斯斯坦, the only significant battle between Chinese and Arabs.  The defeated Chinese army was commanded by Gao XianZhi 高仙芝, a Korean general who served Tang well up until that battle.  As a result of this decisive battle, Chinese dominance of Central Asia halted and eventually diminished.  In time, the widespread Buddhism in Central Asia was replaced by Muslim to this day. 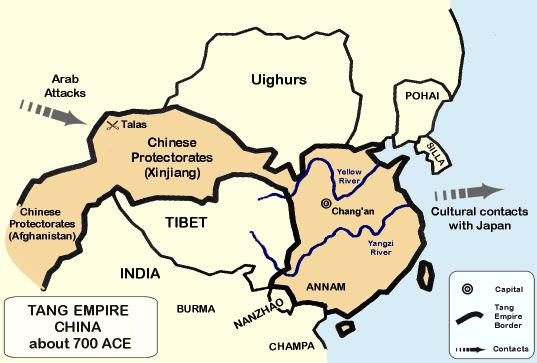 During Tang domination of present day XinJinag, it established a direct administrative unit at GaoChang 高昌故城.  Although GaoChang is located far from China proper, its inhabitants during Tang dynasty had substantial number of Han 漢 people from China.  The Han people began to live in GaoChang as a result of Chinese army posting during the earlier Han 漢 dynasty (2,000 years ago) and emigration from China proper seeking better lives.  This was one instance of Chinese colonial settlement in a faraway place for its land was arable for farming.

Under Tang administration, GaoChang was a vibrant and productive oasis that benefited from Silk Road trades.  Centuries later, it became independent of Chinese rule and was inhabited by local Uighur people for another thousand years.  The vibrant city was eventually abandoned when the desert encroached upon this city.

The GaoChang ruin is fairly big, and riding donkey cart made it bearable in the summer heat.  My cowboy hat stood out among baseball hats, and it provided all around shades. 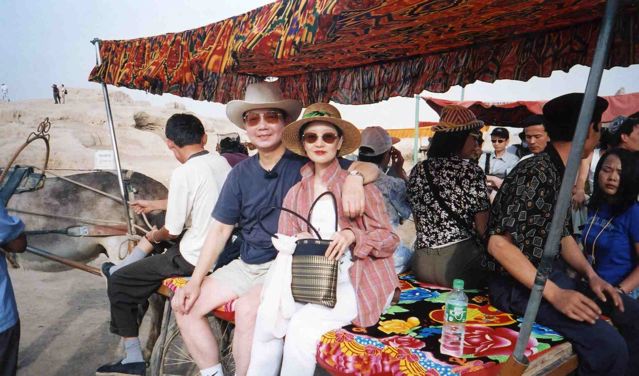 Along the road into GaoChang, big ruins were big houses with big rooms.  The city wall had 12 iron doors, and the city supported a population of 30,000.

Adobe bricks were extensively used to build houses.  Some houses were nicely and artistically decorated.

Walls and courtyards once brimmed with human activities are ghostly quiet now.

A large building in a large courtyard.

As GaoChang was a Buddhist state, alcoves to display Buddha images were built into walls. 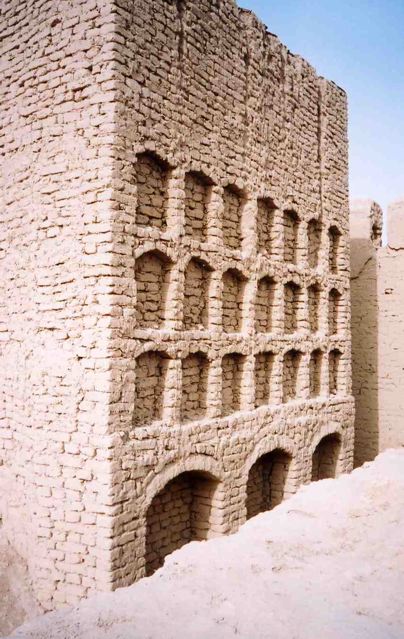 A famous Chinese novel Journey to the West 西遊記 is a story of a monk who went to India with his three disciples, one of them the monkey king.  On their way, the four met all kinds of demons and fairies, and overcame numerous sorceries by their true faith in Buddha and by the magical powers of the monkey king.   This story is a fantastic extrapolation of an actual journey of the Tang monk Xuan Zhuang 玄奘 who brought back volumes of Buddhist scriptures from India.

When Xuan Zhuang arrived GaoChang on his way to India, he was well received by the CaoChang king.  Xuan Zhuang proselytized Buddhism for a month in this circular compound.  The GaoChang king gave Xuan Zhuang diplomatic letters that eased his subsequent trips through numerous other city states.  This episode was morphed in the Journey to the West into an involuntary confinement of the monk by a powerful demon. 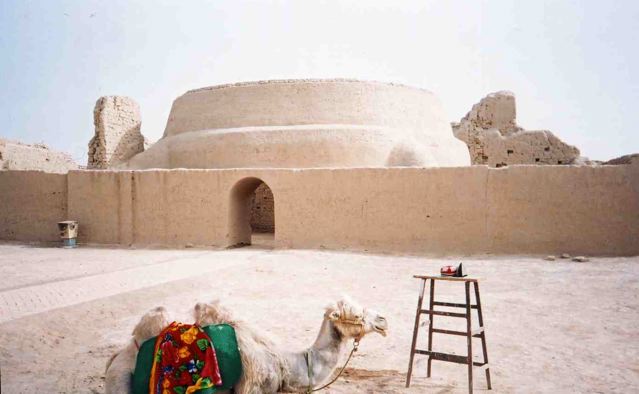 The ruins of JiaoHe City is located near GaoChang.  It got its name from its sitting on a 100 feet high buff between two rivers.  The city center was at the southern tip of the buff, with temples and cemeteries to its north, and farm fields beyond them.  Its vertical cliffs offers it protection without the use of walls, and its position on the Silk Road gave it wealth.  It was submitted by China to UNESCO in 1996 as a World Heritage Site candidate, being a rare and complete ancient city ruin.  During Tang dynasty, it was the seat of a Tang administrative unit and the command post of the Tang Western Army, and supported a population of 6,000.  600 years later, it was finally abandoned after being ruled by various non-Han tribes.

From the air, JiaoHe looks like a smaller version of the Masada citadel in Israel. 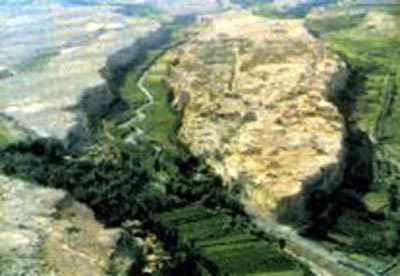 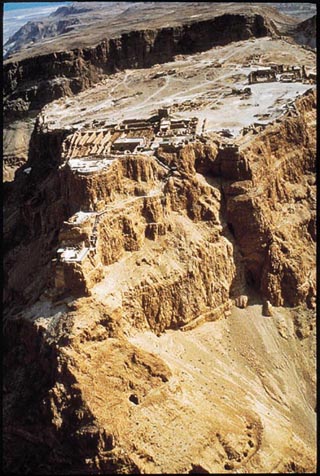 The center of the city is bisected by an avenue, repaved recently to accommodate tourists.

The houses bordering the avenue had no doorways opening to the avenue.  This was apparently built for defensive purposes.

As wood was rare in this part of the world, houses were dug into the ground and also built up with adobe bricks.  Wells hundreds of feet deep provided drinking water.

The highly decorated houses can still be glimpsed from these ruins.  For 800 years since its abandonment, the arid climate preserved the city and is considered a rare intact site to study ancient cities. 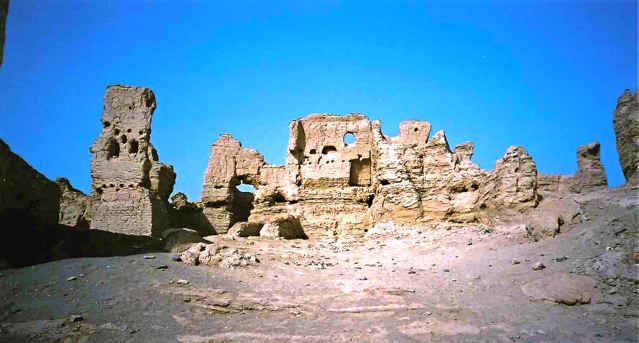 At the northern edge, a religious building dominated the landscape.

Local school children visited JiaoHe to build appreciation for their heritage and history. 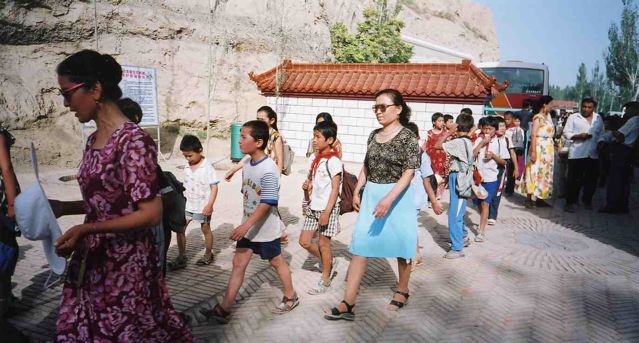 A more recent, obscure ruin on the Silk Road is the QiaoWan Fort 橋灣古城 ruins.  It is located next to a river 疏勒河 running off from the mountains through the desert. 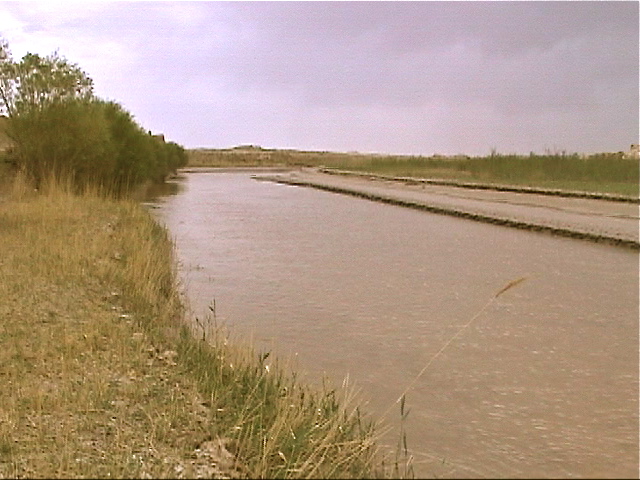 The ground next to the river was encrusted with salt, a result from salination by periodic flooding of the river. 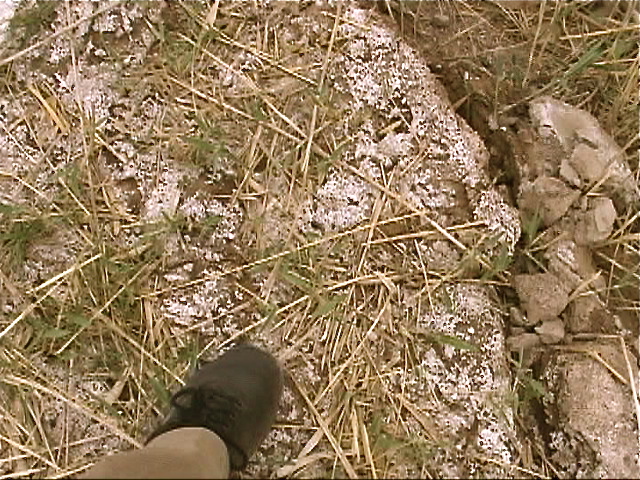 QiaoWan Fort was built only 400 years ago during the Qing 清 (Manchu) dynasty.  Legend has it the emperor sought an excuse to get rid of a powerful official.  He ordered the official to build a fort in the desert for him to stay if he should visit XinJiang.  Doubting the emperor would ever visit such a desolate place, the official pocketed the building funds and built an empty fort enclosed by a wall.  As the story goes, the emperor found out about the flimsy fort, declared the official guilty of stealing from the emperor, and had him executed.  To deter other officials from such deceit, the emperor made a lamp with the official’s skull and drums with his skin.  The drum was beat periodically as warning to other corrupt officials.

An ancient beacon tower stood near the QiaoWan fort, testifying to Chinese presence and their military establishment here at one time.  The Manchu was one dynasty that did not rebuild the Great Wall, preferring to unify all ethnic groups in China by military might coupled with diplomatic policies.  So this beacon tower was probably built before the Qing dynasty. 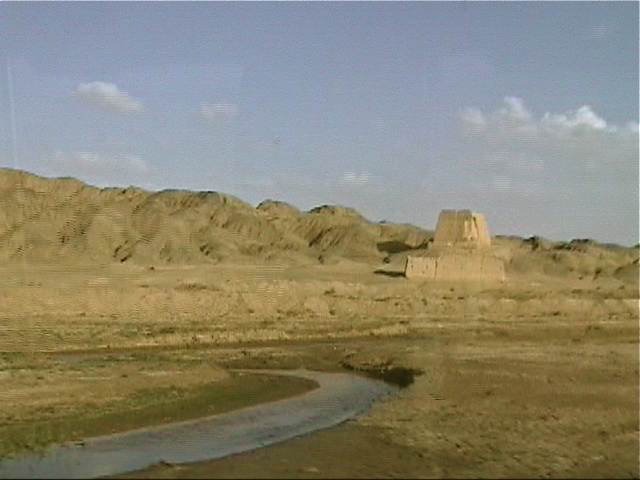 Standing on top of the fort wall, one could see nothing but flat desert land and the lonely river.  The fort was never seriously occupied, as it was only a sham structure of an official’s money grabbing game.

In the museum adjacent to the fort ruin, an Indian work of art was displayed.  It was an intricately carved ivory box that opened to show the Buddha’s life in small separate compartments.  Such artifacts testified to the close interaction and mutual influence among various peoples through the Silk Road. 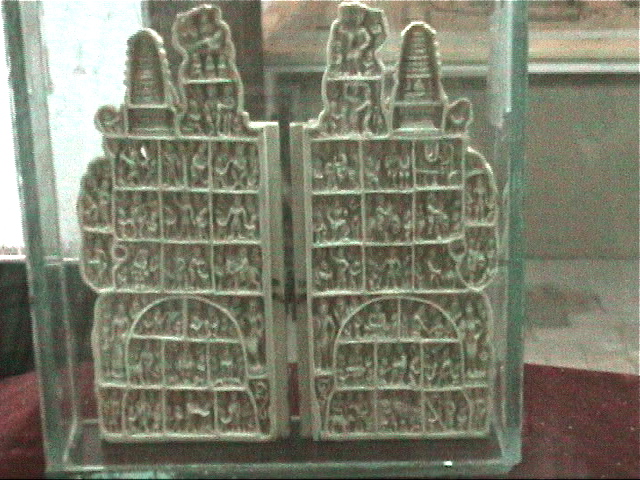