We read about the three-year drought in Kenya one week before we departed for east Africa and knew about the havoc it wreaked on the animals there. When we were actually on the grassland of Masai Mara National Park, we only saw dozens of migrating zebras and wildebeests, and some resident animals such as antelopes and giraffes.

We saw on National Geographic channel migrating wildebeests by the millions ………

The largest migrating group we saw numbered less than one hundred.

My friend visited Kenya last year and saw thousands of migrating animals from a hot air balloon. It’s astonishing how much the animal population was reduced in Masai Mara in one year due to the drought. It is said the animals stayed in Tanzania as the grass there was adequate and they didn’t need to cross the border and enter Kenya.

The large number of wild animals living in this part of Africa is partly due to the custom of the Masai in not hunting wild animals for food. They relied on their own cattle’s milk and meat for a living, sparing the wild animals. The Masai would hunt and kill lions only when they attack their cattle, and in the ritual of growing into a warrior. 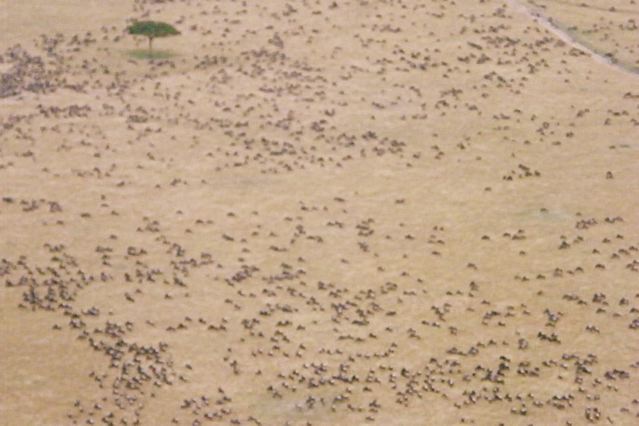 The grass were parched and the rivers ran dry. This stream flow was cut from the lack of water and became a series of puddles, traps for lions to ambush thirsty animals. 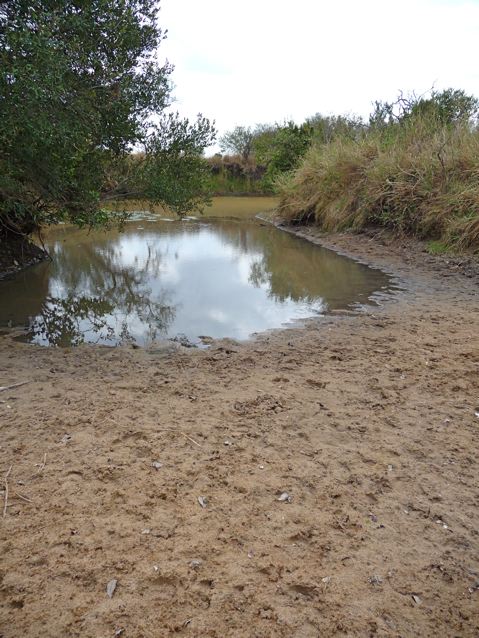 The tourists drove around the grassland looking for animals, and followed an interesting subject like paparazzi. 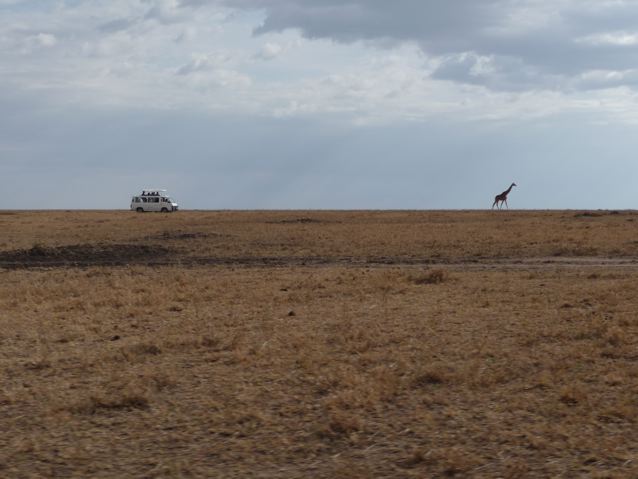 Marobou storks hanged around a resting buffalo, waiting for it to die. The buffalo can almost be heard mumbling “Not so fast, buster. I still got years of life left,” 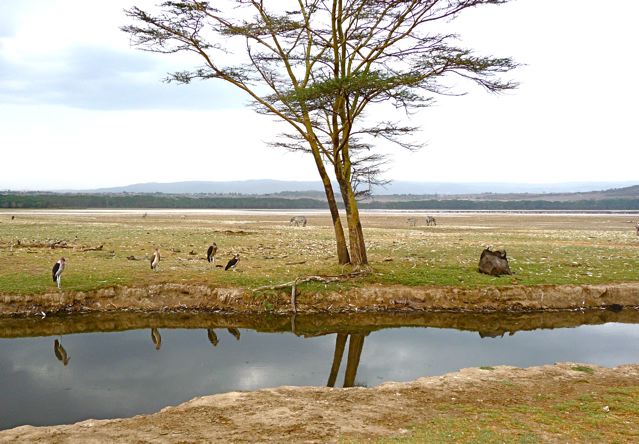 There are the Big Five animals to be seen in a safari: Hippo, buffalo, rhino, leopard, and lion.

Our driver/guide did his best to find these five animals for our cameras. This lone hippo was seen wandering in the grassland in the mid-day sun. Normally, hippos would soak in a river among its kin group. This hippo’s skin is lacerated, perhaps the result of a lost battle, and it looked banished as it wandered in an unlikely setting. 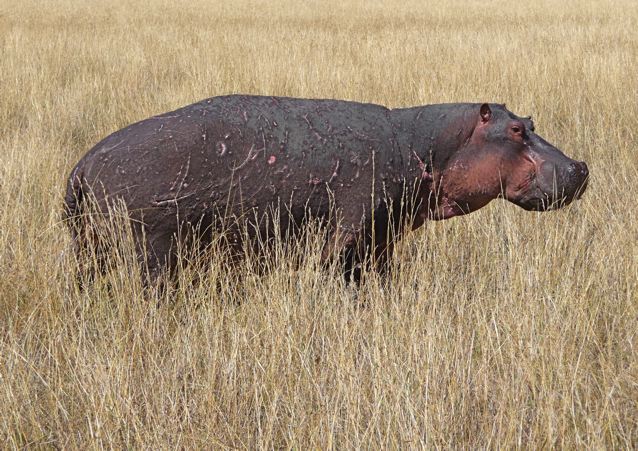 This buffalo cow was nursing a calf. It was protective of the little one and, true to its reputation of being bad tempered, charged a passing jeep. 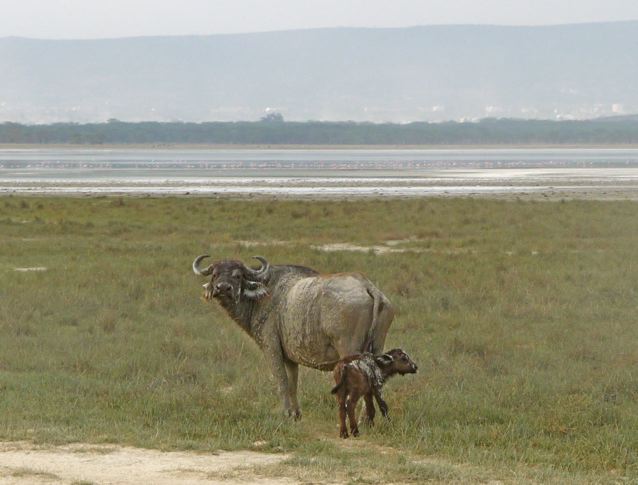 With its buck teeth, the buffalo calf had a face only its mother would love. 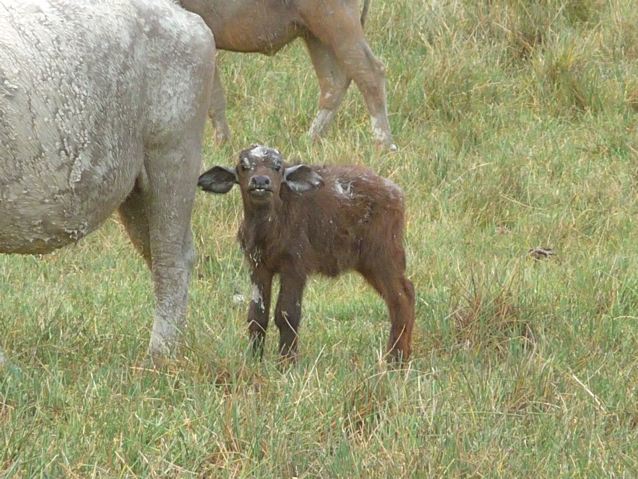 A family of rhino was disturbed by our van. As they escaped from us, the mother always put herself between our van and her darling calf. Here, they broke into a gallop and ran at some 50 miles/hour in a cloud of dust. They did not look clumsy at all when they galloped. 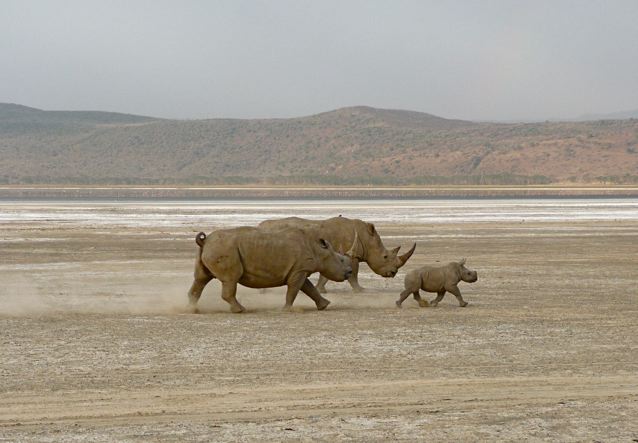 A Leopard was caught sleeping on a tree. 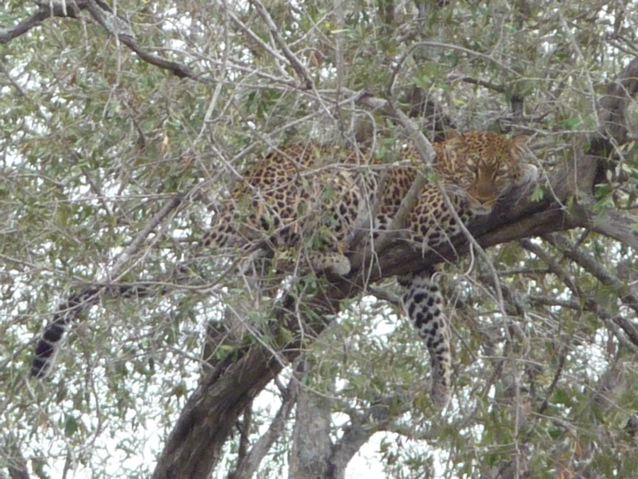 Later, it was seen playing with two adolescent cubs and eventually vanished into the underbrush. At one time, it stared right into our eyes ten feet from our open windows. 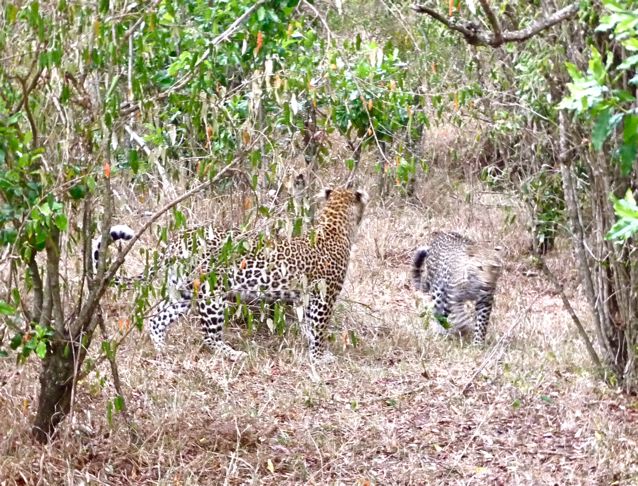 We came upon a buffalo kill that occurred shortly earlier at a water hole. Three lion cubs feasted on the buffalo carcass. 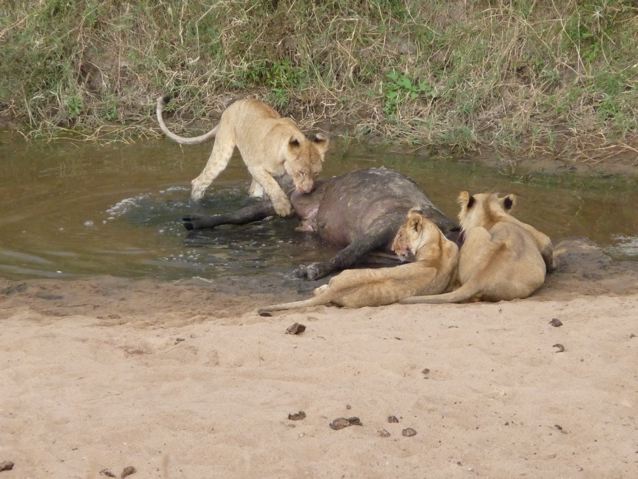 The next day, we went back to the kill site and saw the lion has dragged the carcass into a bush and was protecting it from scavengers. 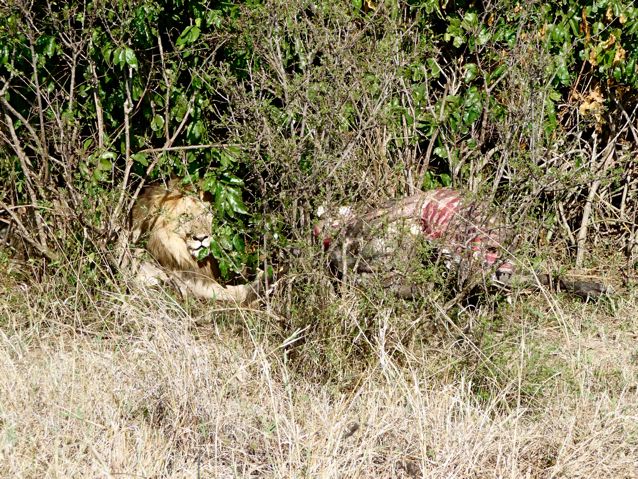 After eating their fill of buffalo meat, two lions mated. These tourist vans and cameras filmed their mating actions close up. 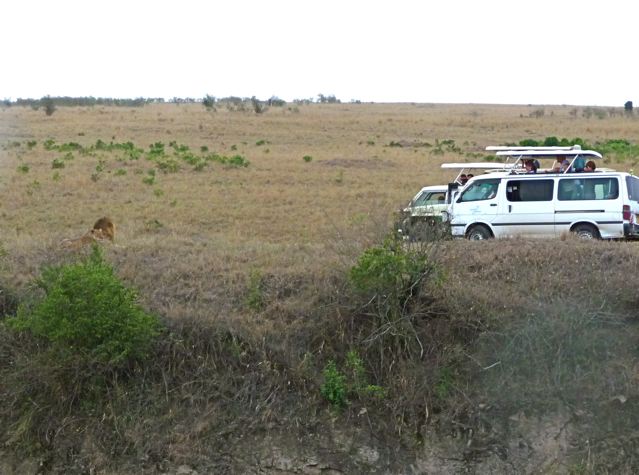 The lion couple snuggled in between mating bouts. The male lion’s mane was lush and full. Sally was a beautician in her youth, and her professional instinct gave her an urge to comb the lion’s mane and straighten its right-ward bias. 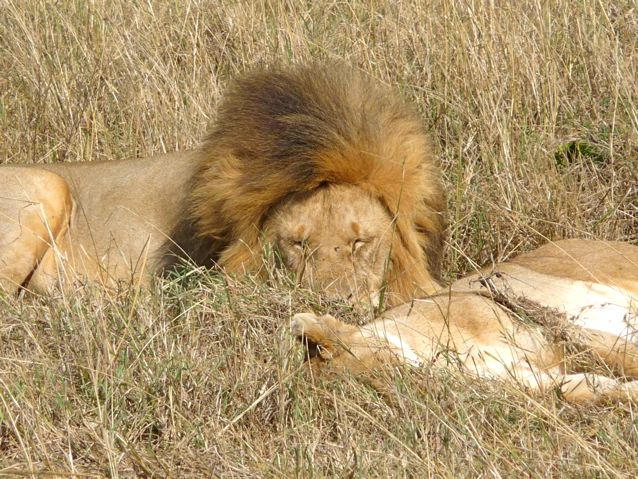 We went to Lake Nakuru, the famous flamingo lake where millions of flamingoes waded in the water. This is the scene we usually see on National Geographic channel. 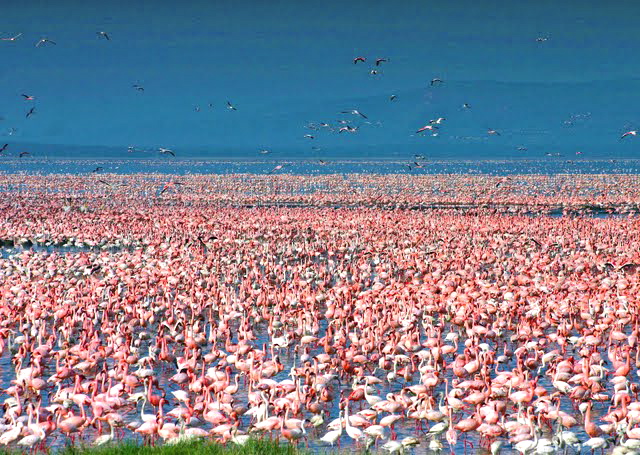 To our disappointment, we saw hundreds of flamingoes instead of millions. While they were still beautifully colored, the impact was lost. 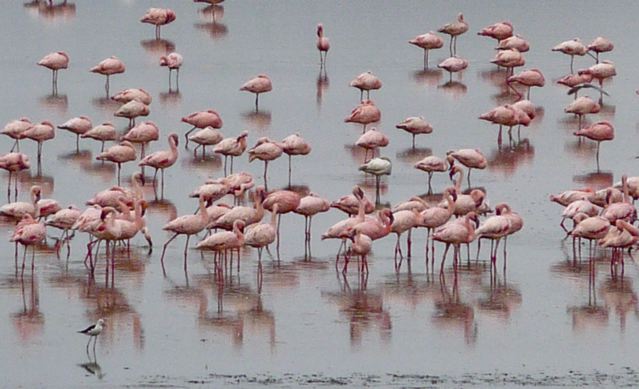 The flamingoes left their red tipped feather on the dry lake bed, crusted with dried salt. 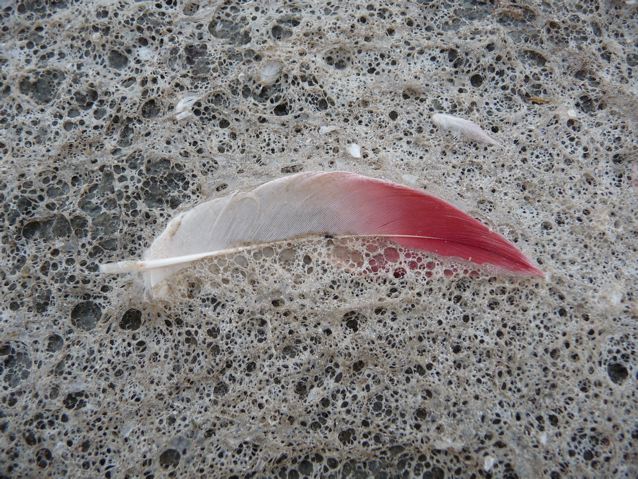 Endless piles of flamingo feathers testified to their earlier abundance in this lake. The drought reduced water flow into this salt lake and the lake dried up. Most of the flamingoes left for an adjacent lake to feed and live. 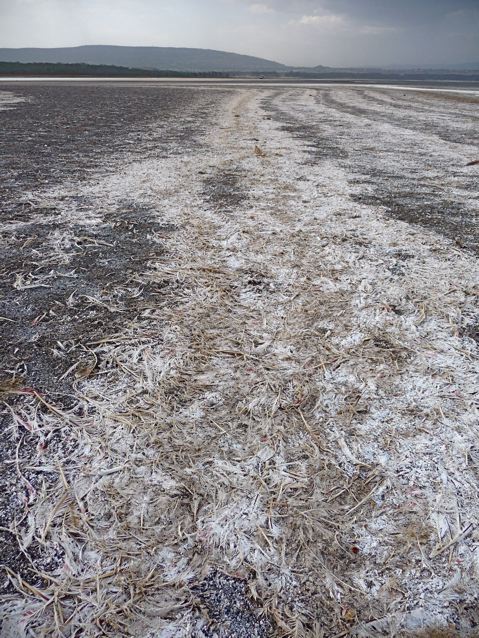 We also saw other interesting animals. Here, a group of a dozen bachelor elephants watched our van intensely. 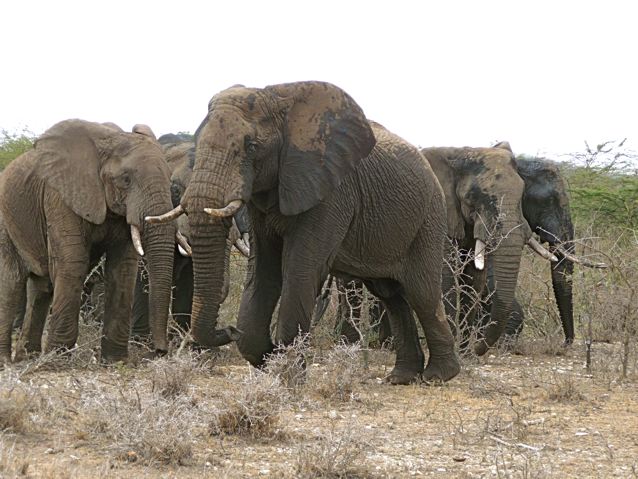 If they wanted to, they could easily topple our van. Curiously, animals on the grassland view vehicles as just another harmless large animal. They seem to be oblivious to the humans moving around inside the vehicles. It was safe for us to be in a van with windows open and only a few feet from a lion. 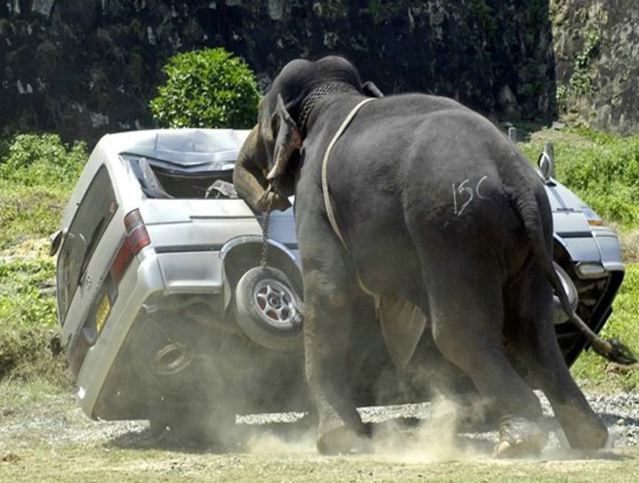 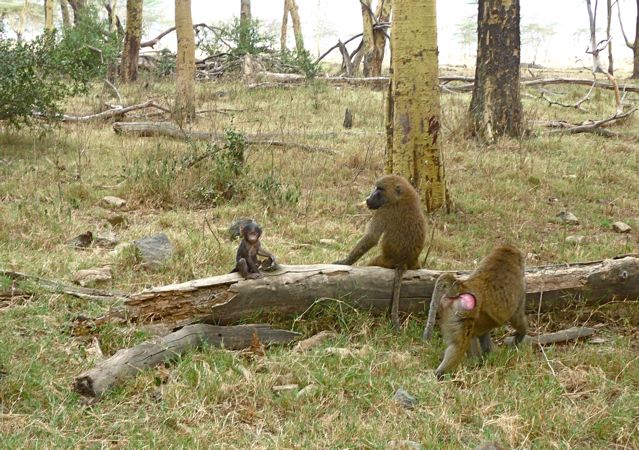 Here, a wild monkey visited its cousins in an animal orphanage, and made a fool of Robert as it ate out of Robert’s hand. 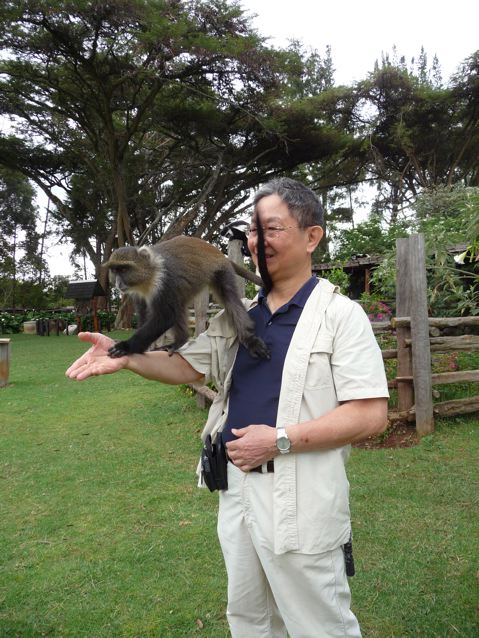 A family of warthogs scrambled like mad with the little piglets running like greased ball bearings. They were startled by an overhead hawk which would catch the piglets for lunch. 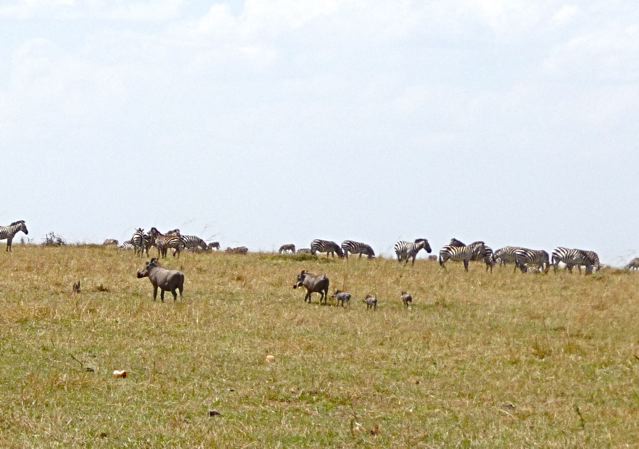 A cheetah mother napped as her cub lazed in the shade. 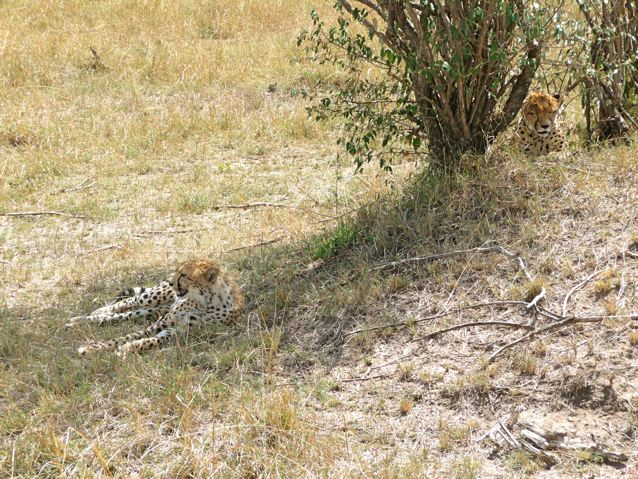 Three guinea fowls accompany a python as it slithered on a dry stream bed. The python was over ten feet long. It advanced a little further and made a U-turn towards another python in the bushes. They were caught in the process of mating. 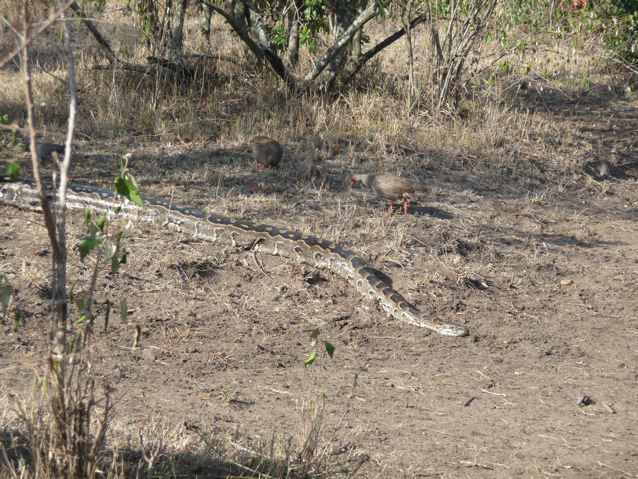 The classic scene of hordes of migrating wildebeests crossing the Mara River, braving torrential currents and snapping crocodiles, enticed us to join this safari. 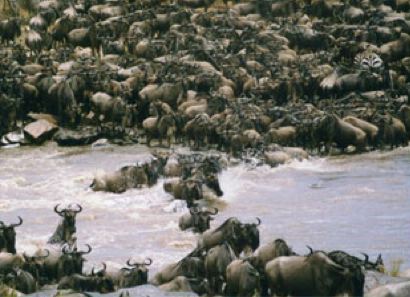 Instead, Mara River ran ten feet lower than usual and animals could walk across shallow parts of the river. This was the site of the normal animal crossings, and it was quieter than downtown on Sunday morning.

In normal years, wildebeests and zebras would be stampeding up this ramp, trampling these tourists. 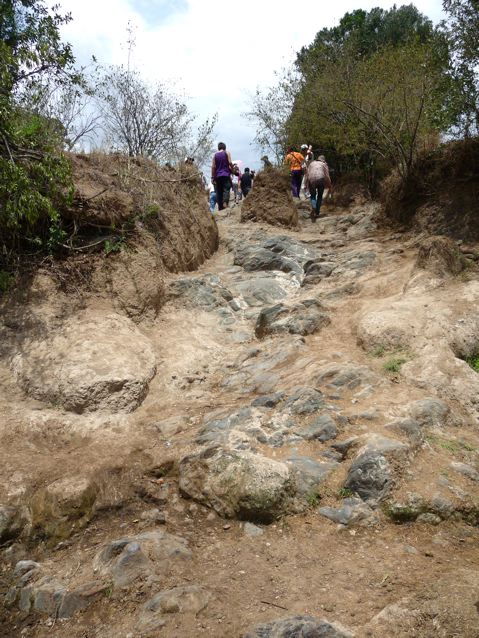 While crocs ate carcasses of plentiful drowned animals in past years, they are starving this year due to the lack of drowned beasts. Instead of sunning themselves, they were busy swimming around, looking for food. 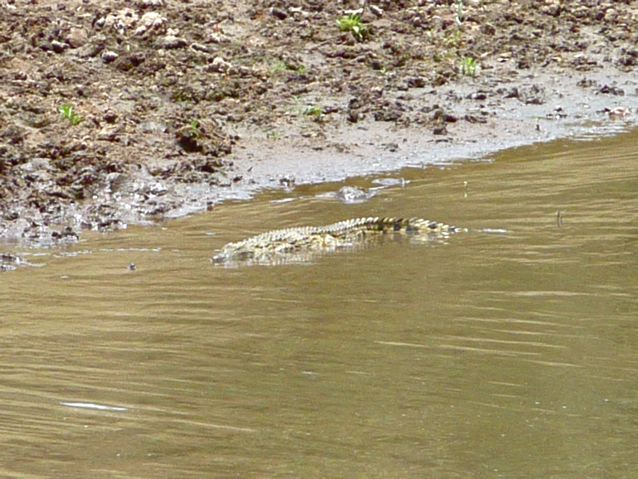 A group of hippos slept on a riverbank. One member of our tour group walked beyond the warning sign and onto the river bank. The hippos woke and rushed into the river, and our member retreated. His indiscretion got us a stern reprimand from the angry game warden and our group was banished from this site. 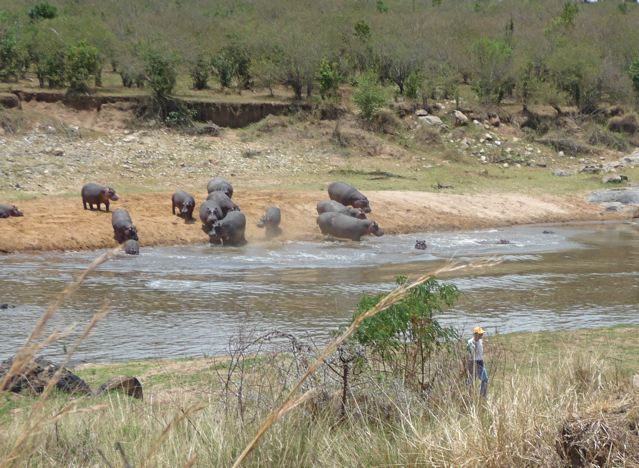 Hippos are the most dangerous animal in Africa. While it is a herbivore, it has a bad temper and can gallop fasted than a man can run. Hippos kill more people each year than all of the other large animals combined. Mr. Wong could have been killed. The warden’s anger is understandable. 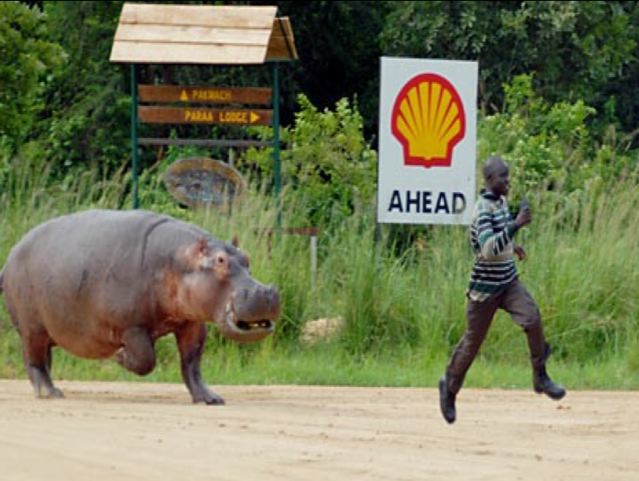