As a Cantonese person 廣東人, I always knew my spoken Chinese is different from that spoken in the rest of China. This distinction made me interested in my heritage and the local history of GuangDong 廣東 within the larger history of China.

The following is the result of my quest to find my Cantonese 廣東 roots. This brief history may be somewhat tedious, and you may not want to dive into it. But if you are interested in Chinese history, you may find it interesting.

The Ethnic Groups of Ancient China 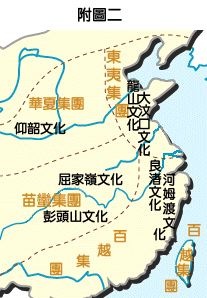 Han 漢 people make up 92% of China’s population today, the other 55 minorities make up 8%. These 56 ethnic groups are called nationalities in today’s China. The following web site gives details on them:

What Happened to the Ancient Tribes?

Of these groups, the Hua Xia 華夏 group developed first and became the most advanced Han 漢 civilization. The Hua Xia 華夏 people expanded, conquered and were sometimes conquered, assimilated, and absorbed the cultures and gene pools of all the other groups. This conglomeration of cultures became today’s Han 漢 Chinese people who are all considered descendants of Yellow Emperor 黄帝子孫. Hence the Yellow River 黄河 basin is credited as the cradle of the Chinese civilization.

In this amalgamation, the Dong Yi 東夷 group was absorbed and that land produced Confucius 孔夫子. The Miao 苗 group was sinicized, its land became the rice bowl of China and produced Lao Zi 老子 of Taoism 道教. Nomadic tribes from the North and Northwest raided China proper and caused great deals of headache, but they were eventually absorbed into the Han 漢 gene pool. The southern Bai Yue 百越 was conquered 2,000 years ago and the mixture of Han 漢 and Yue 越 cultures produced a patchwork of different results. 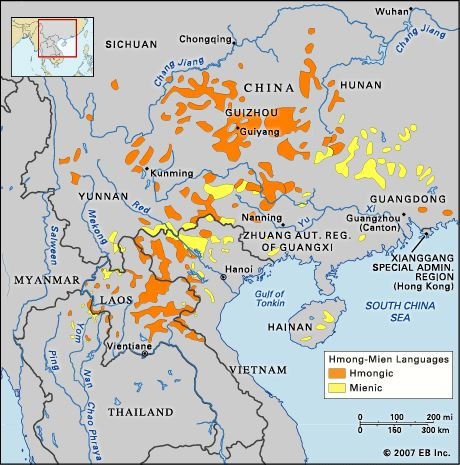 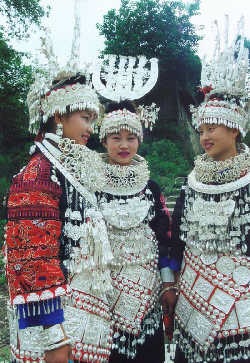 Bai Yue 百越 was the encompassing name given to many ancient tribes that lived along the southern coast. There were no detailed records of their individual ethnicity or language. They included the following tribes:

The ancient Yue 越 people shared some common traits. They lived in stilted houses, cut their hair short, bared feet, tattooed their bodies, ate snakes, grew rice, had frogs as their totem, held the bronze drum as sacred symbols of state, were skillful metallurgists who made sharp swords, and were good seamen. It is speculated they sailed the seas millennia ago and populated the Pacific Islands of Philippines, Indonesia and Polynesia. 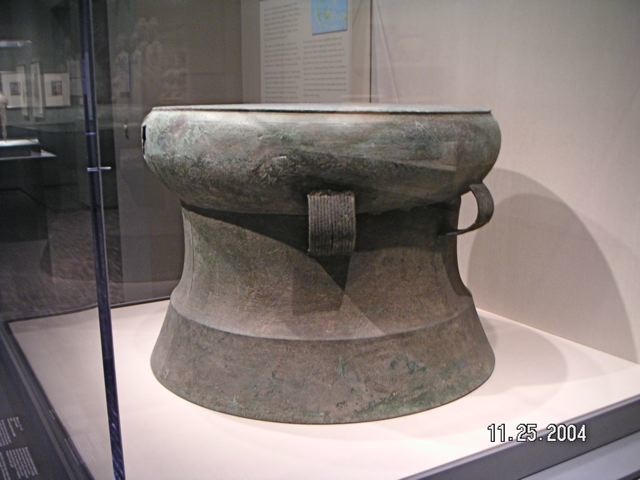 (from web)
The Transformation of Bai Yue 百越

The Bai Yue 百越 tribes were conquered by 500,000 troops of the First Emperor of Qin 秦始皇 2,200 years ago. With increasing number of Han 漢 people moving into Bai Yue 百越 lands as soldiers, migrants, exiles, or refugees, Han 漢 culture began to dominate. Han 漢 people had greater cultural, economic and political powers, driving many Yue 越 people into the hills. The Yues 越人 who remained in lowlands assimilated to the Han 漢 culture, resulting in new dialects of the Chinese language: the Wu 吳語, Cantonese 粵語, and Fujianese 閩語 spoken languages.

The following map of Chinese spoken language distribution today shows the homogeneity of PuTongHua 普通話 in most of China, but a heterogeneity of many dialects in the old Bai Yue 百越 areas along the coast. While people speaking different dialects may be mutually unintelligible, they share the same written language. Written Chinese is not phonetic and a character means the same even if read with different sounds. If people cannot understand one another’s spoken Chinese, they can communicate in writing. 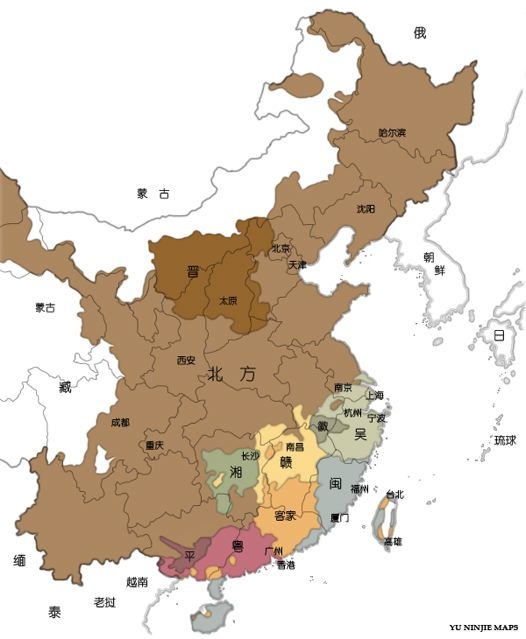 Shortly after the Bai Yue 百越 tribes were conquered, they yearned independence. A Nan Yue kingdom 南越國, incorporating what is Vietnam today, arose in today’s GuangDong 廣東; and a Min Yue kingdom 閩越國 arose in today’s FuJian 福建. They lasted about a hundred years before they were absorbed by the Han dynasty 漢朝. 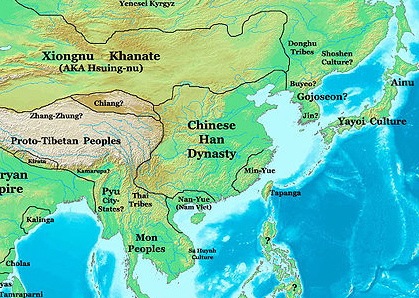 Descendants of Bai Yue 百越
In the last 2,000 years, most of the Bai Yue 百越 people have mixed their gene pools with the other groups of China. Nan Yue 南越 has sinicized as the Cantonese people 廣東人; MinYue 閩越 have sinicized as the FuJian people 福建; and Gou Wu 句吳, Yu Yue 於越 and Yang Yue 揚越 all have sinicized around the Yangtze River; and today they all call themselves Han 漢 people.

But some tribes resisted assimilation and sought independence from Han 漢 domination. Substantial number of the Zhuang-Dong 壯侗 (Tai-Kadai) language tribes migrated a thousand years ago to today’s Thailand and became the Thai people, and to today’s Laos and became the lowland Laotian people. Other non-sinicized Zhuang-Dong 壯侗 language tribes scattered in southwestern China and are today’s Zhuang 壯族, Dong 侗族, Dai 傣族, Shui 水族, Gelao 仡佬族, Li 黎族, and Pu Yi 布依族 nationalities of China. Unlike the Vietnamese, Thai, and Laotians, these tribes did not develop political cohesiveness to form independent nations. 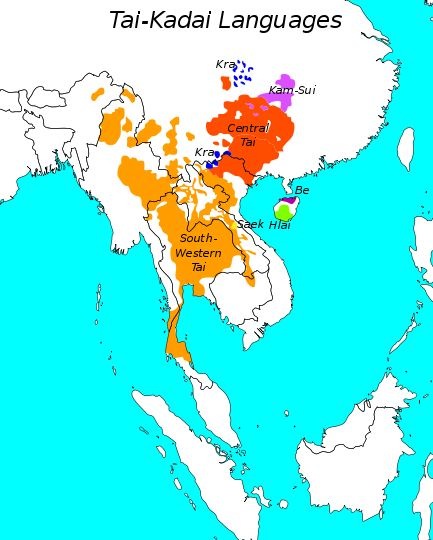 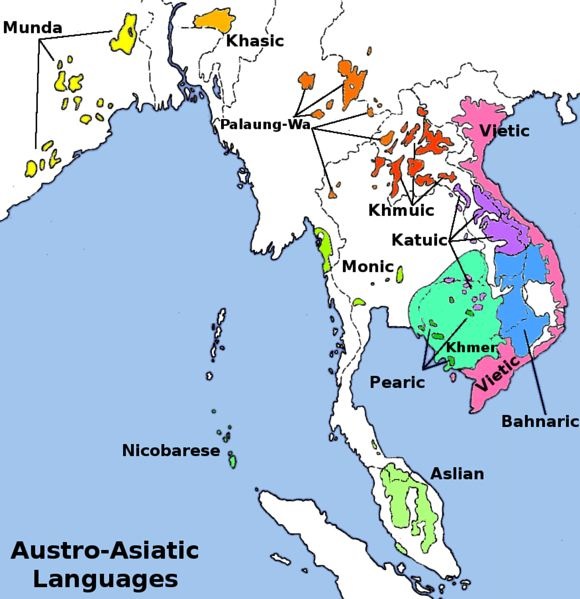 Looking Ahead
The legacies of these Bai Yue 百越 tribes are fading, and the tribes are losing their identities to urbanization of China.  One taxi driver in GuangXi 廣西 told me he was a Zhuang 壯 person, but he lived in the city all his life and he could not speak the Zhuang 壯 language.

As in the US where locality names such as Dakota are leftover native American names, Bai Yue 百越 legacies also exist as occasional leftover place names even after the ancient tribes are long gone. For example, in Hong Kong, Wo Che 和輋 means Wo Planting Hillside and ShaLokTung 沙螺洞 means ShaLok Village in the ancient Li Liao 俚僚 language.

The study of the tribes of China is a continuing process to identify and categorize the many groups of people from ancient times to the present. As science advances, newer methods will be used and new findings will be discovered. Until then, this is the brief story of the southern tribes of China.