I flew to Nanjing to observe the memorial services of the 70th anniversary of the Rape of Nanking in 1937. On December 13, I visited the former John Rabe residence and the Nanjing Massacre Memorial Hall.

At 10 AM, the siren sounded all over the city to memorialize the fall of Nanjing to the Japanese army. I was in the refurbished former home of John Rabe and joined in the honoring of this German who was instrumental in saving thousands of Chinese lives. John Rabe was a Nazi and the chief representative of Siemens in Nanjing.

An old lady whose family was saved by John Rabe presented a bouquet to the Rabe statue. 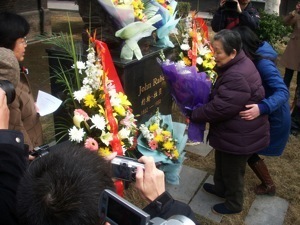 A young man bowed his head in front of the John Rabe statue. 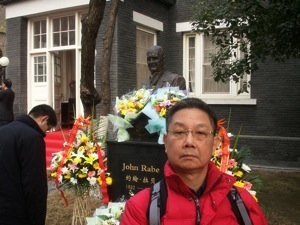 I then went to the newly expanded Nanjing Massacre Memorial Hall which is 3 times the original size. Through their exhaustive effort, over 11,000 victims files were collected and stored in the Hall. It is in contact now with the Military Museum in Taiwan to collect the files of 100,000 Chinese soldiers who were slaughtered after they lay down their weapons.

By the time I arrived the Hall, the official ceremony was finished, but thousands of attendees were waiting to enter the exhibition hall. I was told it would be a four hour wait and I forwent the exhibitions. 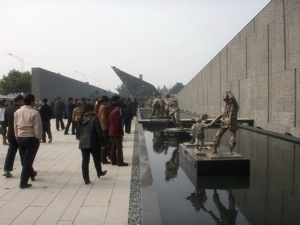 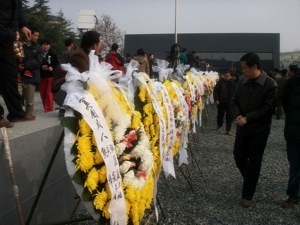 Many wreaths were presented to the Hall, some from Japanese groups. 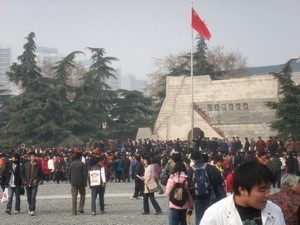 The plaza of the Hall is huge. On one end, a triangular building climbs towards the sky. On the other end, a huge bell of peace sounds message of mourning and hope for peace. 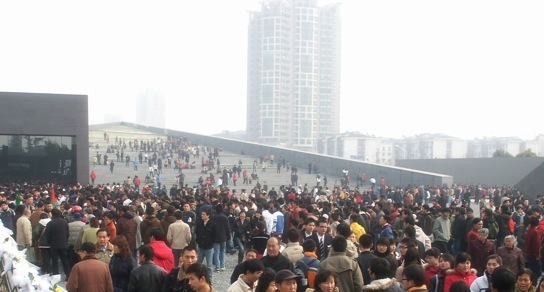 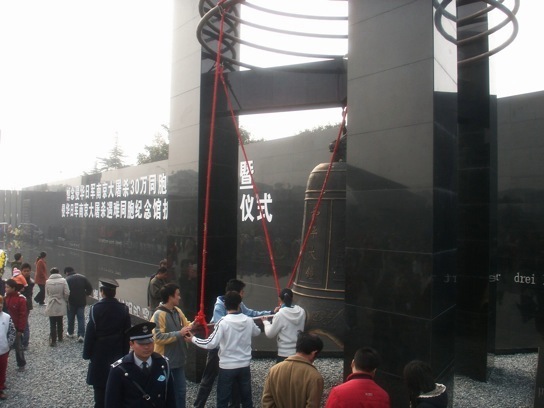 Foot prints of some elderly survivors of the catastrophe are cast in bronze. 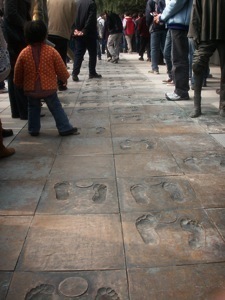 The excavated mass grave from the old Hall is still exhibited.

Another mass grave was discovered during the expansion of the Hall. 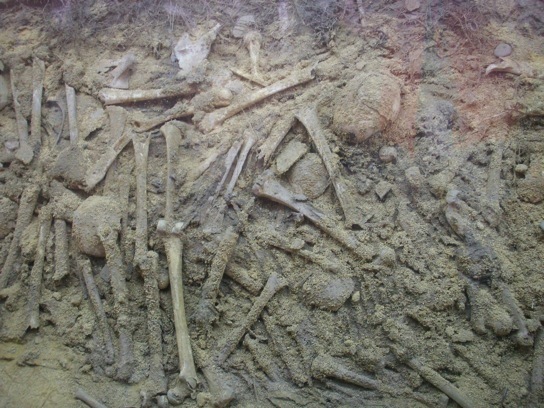 Rows of attendees walked up to an alter to bow. 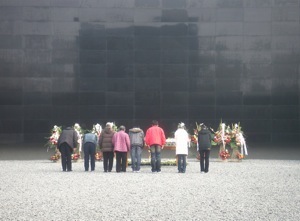 A new emphasized theme of the expanded Hall is the message of peace. At the end of the visitors’ route, there is a big statue of Peace with a dove in her hand. 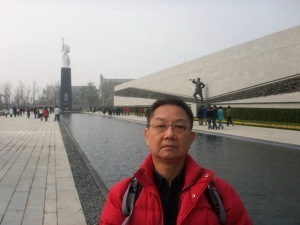 I read in the newspaper that some 100,000 people visited the Hall on that day, and the Hall appealed to the people to delay visiting to avoid the crowds. From what I observed, all the attendees were solemn and introspective as well as respectful of the occasion.

For me, this visit to join in the memorial of the Rape of Nanking with countless people of Nanjing and from all over the world was a soothing experience. It was a pilgrimage I wanted to do for years and I am satisfied that I made this trip.