When we visited Egypt a few years ago, we saw its military in many places.  In Cairo Airport, we saw concrete bunkers that housed jet fighters.

There were check points in many places.  To protect soldiers against surprise attacks, sentries stood behind plate steel shields.

With the many check points to protect citizens’ and tourists’ safety, I felt safer.  When we went by bus to Aswan, passing through some restive areas, 30 buses formed a convoy protected by military escorts.

As in many Middle East countries, Islam is a prevalent influence in Egypt.  There are many mosques in Cairo.

Egyptian society is relatively conservative.  Most women cover their heads when in public, but only a few wore burka that covered everything except eyes.

To shield myself from the blistering sun, I covered my face with a hat shade.  I found another Asian tourist who also covered her face with an encompassing shade.  I think we dressed more conservatively than most Egyptian women.

The city of Cairo is congested with many crowded unkempt streets.

But Egyptians care for their fellow man.  We witnessed a minor traffic accident.  Within a few minutes, people ran from all directions to offer help.  They physically pushed the disabled car to allow other traffic through.

As most people do in other countries, this young couple probably wanted a peaceful environment to raise their three children.

But the political situation in Egypt has been tumultuous in the last few years.  In 2011, the Arab Spring brought out thousands of demonstrators and resulted in the removal of Mubarak, the autocratic president for 30 years.

The Egyptian people were delighted that they were finally able to vote for their leaders.  In elections deemed by most observers as open and fair, the Muslim Brotherhood won the presidency as well as nearly half of the seats in the parliament.  The Muslim Brotherhood is a movement that intends to install strong Islam influence in the laws and everyday life in many Middle East countries.

As the Muslim Brotherhood used its elected position of power to change laws and institutions to implement its Islamic teachings, many progressive Egyptians found them oppressive and regressive.  In early this year, thousands of people protested against President Morsi and his Muslim Brotherhood policies.

After violent suppression of the progressive protesters, the Egyptian military removed Morsi in a coup.

But Morsi’s supporters feel short changed.  They feel they won the election and demand the democratically elected officials be reinstated.  The Muslim Brotherhood conducts massive protests and clashed with the military forces.

The fighting between the military and the Muslim Brotherhood supporters is getting ugly.  After weeks of confrontation and mutual instigations, the military is using live fire to shoot the protesters.

Some protesters have been seen with firearms and shooting at the military.  As of today, hundreds of protesters and dozens of soldiers have been killed.  And thousands have been wounded.  The situation is escalating into a civil war.

The situation in Egypt poses a dilemma to Western proponents of democracy.  Democracy has been proselytized as the ideal political system whereby the people select their political leaders and enact the laws.  If one faction is dissatisfied with the performance of the elected officials, it can mobilize its people to elect its candidates into power in the next election.

The Muslim Brotherhood played by the rules of the game and actively participated in the election process.  They won the elections fairly and feel they deserve to be in power.  But the Egyptian progressive people and the military used force to remove the elected officials, violating the tenets of democracy.

To Western true believers of democracy, this is a tough test of their belief.  Should they want the elected officials deposed in a coup for their Muslim values?  Or should they trust the election process and uphold the Egyptian people’s choices? 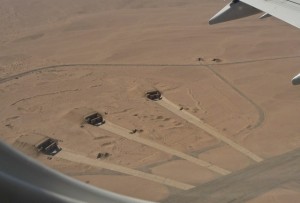 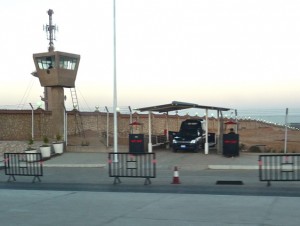 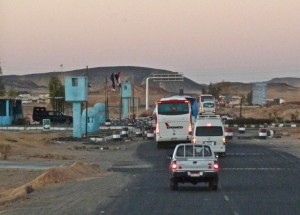 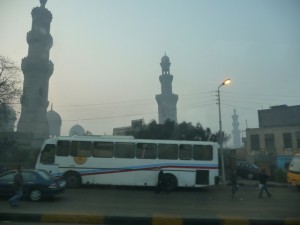 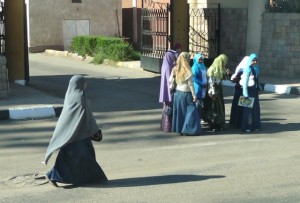 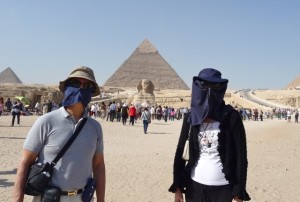 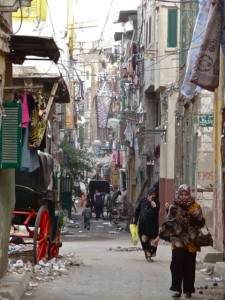 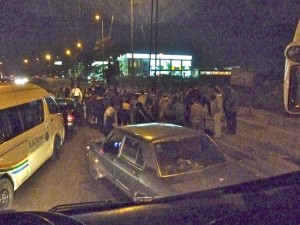 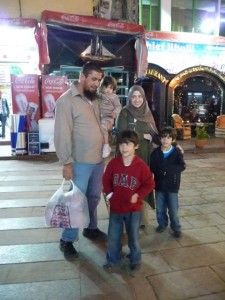 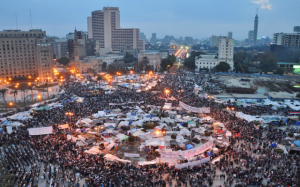 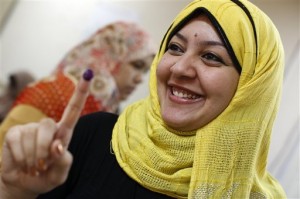 An Egyptian woman shows her inked finger after voting during the second day of presidential elections inside a polling station in the Mataraya neighborhood of Cairo, Egypt, Thursday, May 24, 2012. Egyptians voted Thursday on the second day of a landmark presidential election that will produce a successor to longtime authoritarian ruler Hosni Mubarak. (AP Photo/Fredrik Persson) 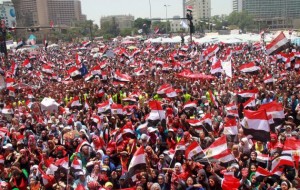 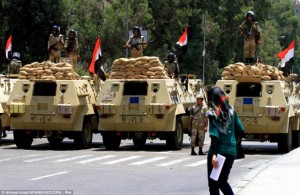 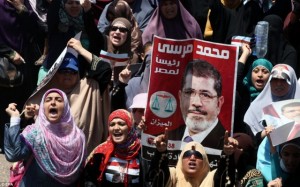 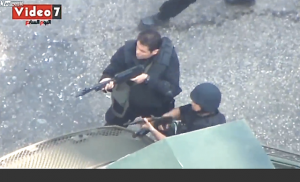 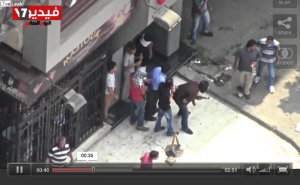