Yesterday, Sally and I decided to walk along the seaside promenade of Kowloon after lunch. It was a lovely December day with temperature in the 70s F (low 20s C), a few clouds in the sky, and a gentle breeze from the east.  This was the kind of weather we yearn for when we suffer through ferociously hot summer days.

Looking eastward across the active harbor, we could see with crystal clarity the high-rise buildings, green hills, and blue sky (photo 1). Ospreys were soaring above and catamarans were gliding over green waves.

As we walked further and looked westward, buildings across the harbor became blurred by brownish smog and the sky turned hazy. We could no longer see individual buildings and the world-famous skyline was completely obscured (photos 2).

As we viewed the panorama, we saw a distinct gradient of air pollution. Starting with crystal clear air in the east, the air gradually became visible in Causeway Bay, and then it became an overpowering shroud in Central, and was down-right opaque in the Western District. As the wind was blowing from east to west yesterday, exhaust from automobiles in the city streets was pushed westward, accumulating as an unhealthy mass in the west.

Sally and I live in the eastern part of Hong Kong and can avoid a lot of the air pollution due to the prevailing easterly wind. But when the wind occasionally changes to westerly, automobile exhaust in Hong Kong combines with industrial air pollution from Pearl River Delta factories to give us a blast of terrible air. This makes living in Hong Kong unhealthy and unpleasant for us. 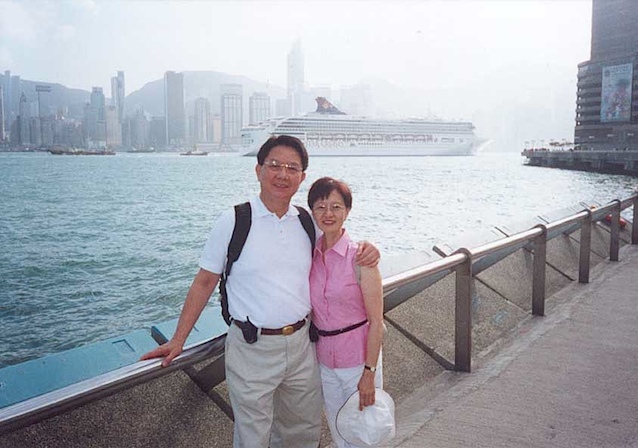